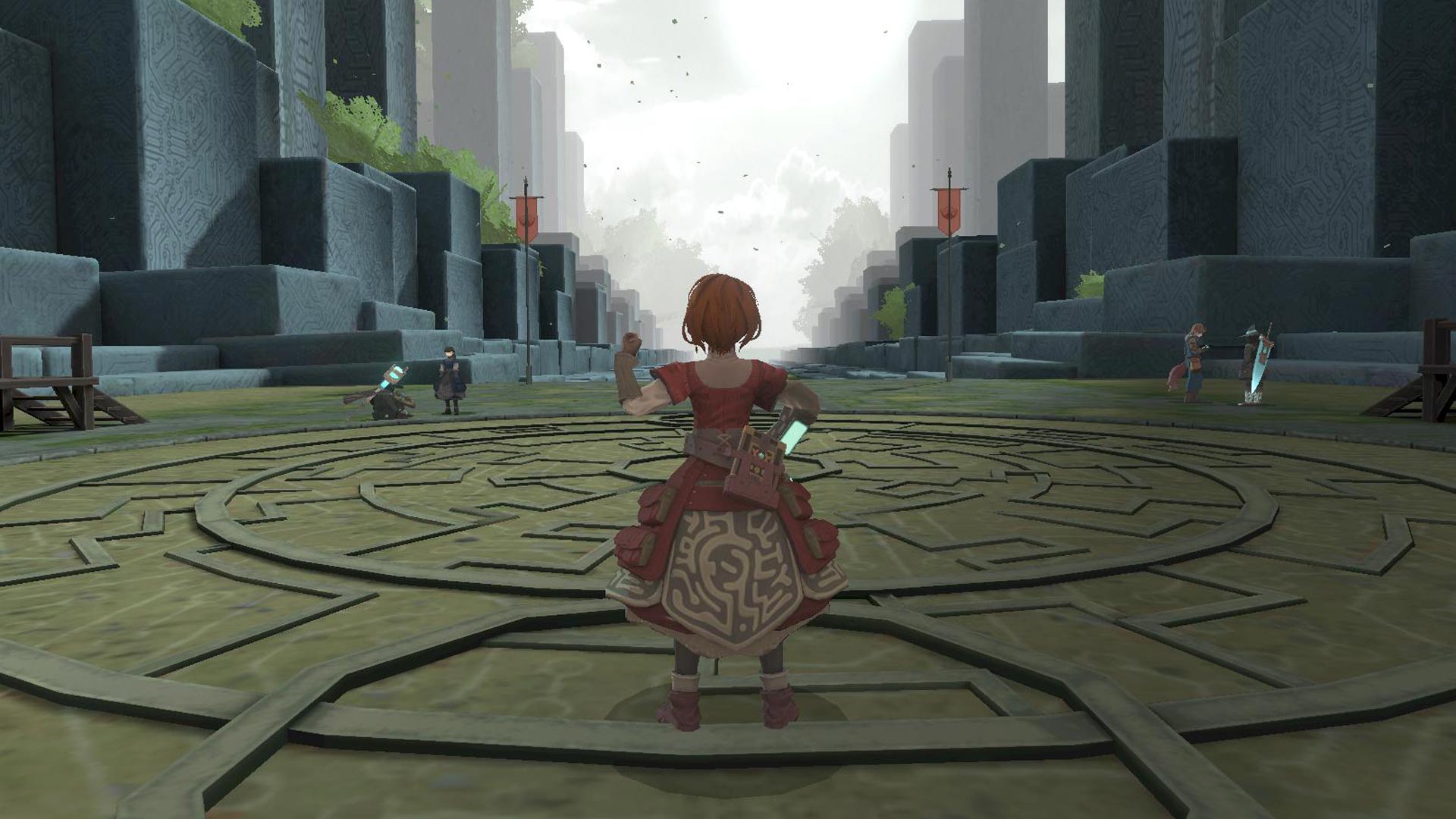 RUINSMAGUS is a Japanese role-playing game with a heavy focus on dungeon crawling and magic-based combat. The game’s anime-adjacent visuals and storytelling style are welcome and familiar pieces, and end up delivering the sort of action you’d expect to find in VR game built around a much larger, more established universe. Combat is mostly efficacious, and it stretches you to implement everything they have at your disposal, although it’s ultimately held back by a lackluster inventory system and repetitive dungeons. This, alongside a number of flatscreen holdovers, make this first-person magic brawler feel like it adheres a little too rigidly to conventions to truly be innovative.

Ruinsmagus is chock-full of anime drama reminiscent of some medieval-flavored mainstays: Attack on Titan, Sword Art Online, Full Metal Alchemist—you know, the sort of show where the protagonist is destined to become the OP badass who saves the realm. It’s a fun combination that sticks to some familiar worldbuilding concepts, and it almost makes you feel like you’ve gone head first into a much larger anime series than the 26-mission game would suggest thanks to the characteristically rich and expressive world.

I say ‘almost’ because, as you’d imagine, there’s a few caveats that may pull you out of your full dive into the Grand Amnis, a town that sits atop a vast labyrinth of ruins filled with magic-wielding baddies. Still, there’s some laughs, romances, redemptions, betrayals—anime fans will feel right at home.

To avoid spoilers, here’s a pretty vague rundown of the story: you’re a sucky wizard (Magus) who progressively becomes less bad as you take on two dozen sequential dungeon-crawling missions into some ancient ruins. The world is looking to you to find some pretty important items that will do… something important that will effect the whole world. By your side is scientist Iris who is your constant companion. While you’re away on dungeoning missions her voice is piped in through a little floating Chibi dude, who can also project Iris as a blue hologram. Iris is basically the game’s waifu, so there’s that.

The story has pretty broad appeal, but (as seen above) if you don’t understand spoken Japanese, this is where the ‘subs vs dubs’ crew wins the day. Ruinsmagus is voiced entirely in Japanese and subtitled in English or Japanese, so take it or leave it. Subtitle windows float around the center of your vision and are interactable with either ‘A’ for continue or ‘B’ to skip the entire section.

At the beginning of the game you’re presented with the choice of Easy, Normal or Hard. There’s no indication what these three substantively mean, and there’s no way to change difficulty once you’ve blindly picked one. For the record, I went with Normal, and about a fourth way through the game the difficulty ramps up quite a bit, taking you from an area where you could easily vanquish any enemy to dungeons that may require multiple tries. It’s more an advisory than a critique, but don’t say I didn’t warn you.

Starting with combat, the game’s brawler-style battle system is a bit of a mixed bag, but I’d consider it mostly a success in translating quick and tactical gameplay into VR. You’re given a choice of a maximum of 14 magic spells of which you can pick three (one primary and two secondary) to bind to your right hand.

Magical ammo is infinite, although you need to reload your gauntlet periodically, which is done with a satisfying downward movement. The little vials on your arm go down as you use magic, which makes for a good visual indicator.

With only few exceptions, magic is mostly range-based, meaning you either shoot spells from afar like a gun, or toss spells for area effect. Holding the ‘A’ button on your right controller instead of simply pressing it lets you charge each ability for a larger effect. Ganking baddies also fills up an ultimate ability, adding a fourth occasional power to your arsenal.

There’s also shield to physically protect yourself from incoming projectiles and parry ranged attacks, sending their attacks straight back at them. Shield strength automatically replenishes, although if the status bar goes all the way down during a fight you’ll need to be light on your feet so as not to take too much health damage.

And being agile on your virtual feet is a real must, as the hundreds of minions you’ll face along with periodic bosses will often telegraph area attacks that can spell immediate death or serious injury if you don’t quick-jump out of the way, a sort of fast dash move you’ll find yourself using constantly.

I won’t spoil and boss battles, but all of them are designed in classical action RPG style, where the environment is molded around the bosses ability—think The Legend of Zelda: Breath of the Wild and many of those encounters feel like they’ve been ripped from the clutches of Nintendo. And that’s high praise!

Both the shield and offensive magic are pretty straight forward and work well. One thing that is sure to trip you up though is the comparatively massive number of consumables at your disposal, many of which are unlocked around halfway through the game. These include various health potions, multiple grenade styles, and a handful of syringes for magic defense and offense. All of that is well and good, but inventory management, or the lack thereof, makes the whole experience of using these items basically a never-ending scramble of cycling through every item.

Your inventory is represented as a single chest holster slot. Pressing a button on your right controller cycles through these items one-by-one, meaning you will have to go through the entire list during combat just to get to something.

What generally ends up happening is you just vomit out whatever is in your inventory as you scramble to dodge magic missiles, shield yourself, return fire, all the while looking down at the holster to visually confirm that you’re actually on the right item.

And buying them is an absolute chore too. It goes like this: end a mission, view your score, cycle through a text description of the things you got, teleport to the shop, scroll through every item, click the item you need, add the number of missing items you need, buy that specific class of item, exit the shop to teleport back to the hub, experience whatever story bit there may be, and head into the next mission.

Because you’re constantly using consumables, you’ll need to mechanically complete these steps for every item you require every single mission of the game. And that objectively stinks.

Outside of enemies, dungeons feel very samey and seemingly empty, which is a shame. There’s no loot to search for, or byways to explore; all rewards are foisted upon you at the end of mission where you’re graded on your time, death, and kill performance. I kept expecting larger, more labyrinthine dungeons, but all Ruinsmagus seems to be able to serve up is the same dungeon pieces on repeat with different colors.

In all, Ruinsmagus took me over eight hours to complete, which included multiple deaths throughout dungeons and boss battles. There’s a such a mechanical nature to the game that it may be best played in shorter stints than my hours-long gameplay sessions.

Ruinsmagus packs in a heap of fun moments that make you feel like you’ve stepped into an anime. The story is maybe a little predictable, but the creators show a deft hand in creating a world that feels alive and lived-in.

My only wish is I could have more of those moments, and that they weren’t so broken up by the mechanical nature of the game. Basically, I hate the idea that, outside of combat missions, most interactions take place through 2D menus with laser pointers. Object interaction is pretty non-existent outside of a few magazines you’ll find laying around, all of which snap to your hand at awkward reading angles.

Whether it be the mission selection board—which only ever has one mission at a time—or the near constant occurrence of forced teleportation during narrative sequences, you’re constantly being reminded that you’re not a participant but rather a watcher in what unfolds. You may be ‘faded to black’ three times in a few seconds just as you enter a pretty nonconsequential chat. It seems the developers decided to segment single narrative encounters so finely that every time a new character springs into the chat you’re faded to black to reset the scene, which isn’t great for player agency. Overall I would have liked Ruinsmagus to have made me feel like I was more of an active participant and not just a faceless protagonist that was always led by the nose to the next mission.

Ruinsmagus also suffers from both frontloaded tutorials and early exposition dumps which set some expectations early on. Immediately you know this will be an experience that focuses purely on combat and passive storytelling—the sort of dialogue drip I’m used to from a  lifetime of Final Fantasy games. That’s no real surprise coming from a JRPG, but in VR it all feels a little too outdated since immersion and player agency are such important elements to the medium.

Ruinsmagus is frenetic, but it’s ultimately very comfortable thanks to some built-in comfort options. There are a few moments when your movement is forced during narrative bits, although these are slow and very few.