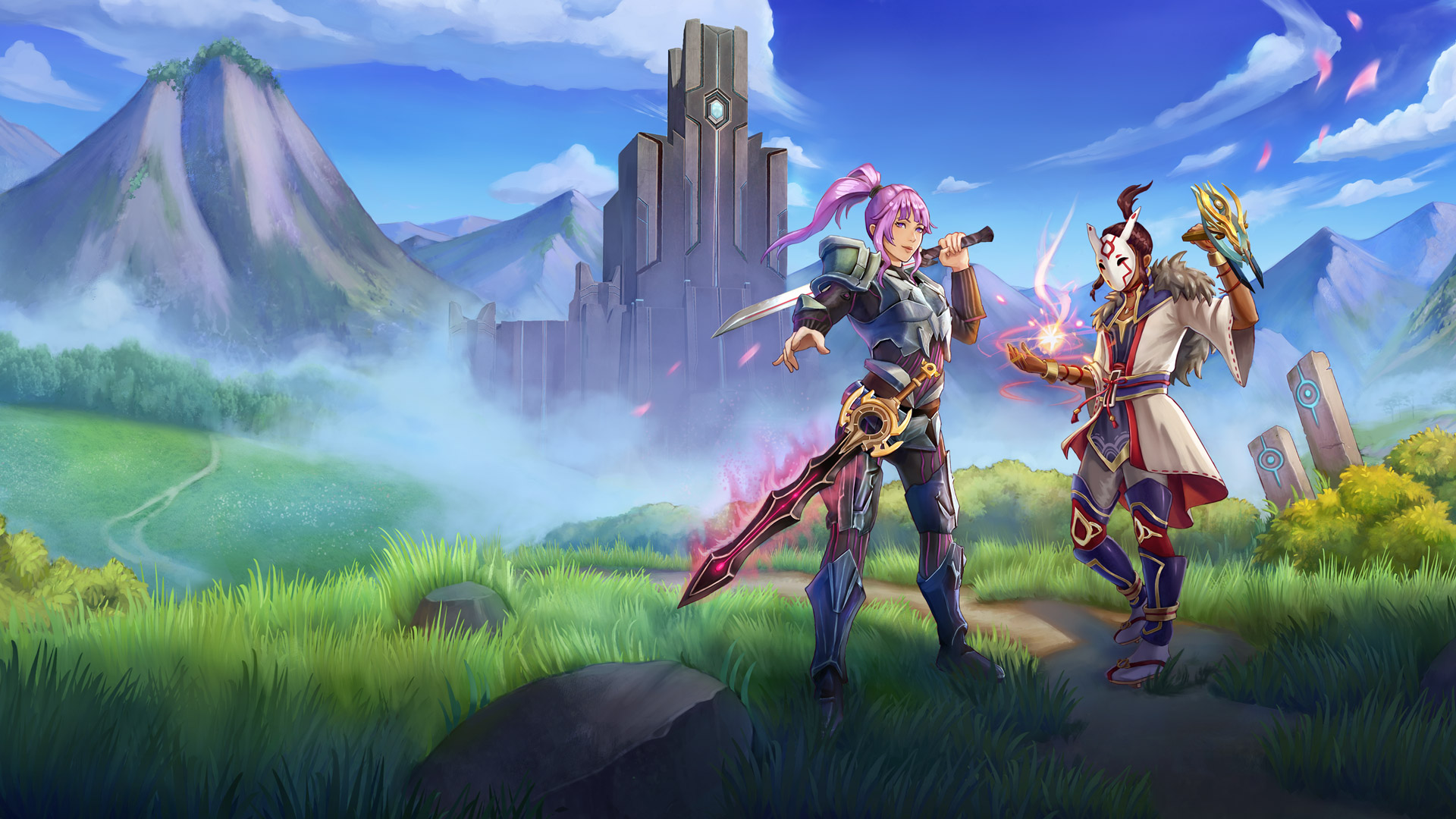 The dream of the VRMMO has been captured in countless movies and shows, but to date the genre really hasn’t seen its breakout hit in the VR gaming space. Zenith: The Last City is the latest shot at making a great VRMMO a reality, but does it deliver?

Editor’s Note: This is a Review in Progress. Zenith is a large game with a long progression. We’re publishing some initial impressions here because we want to share what we’ve seen so far, but still have more to explore before we’re ready to give the game a final score.

At its core, Zenith: The Last City isn’t doing anything new with the MMO genre. In fact, its foundation takes strongly after MMOs of yesteryear like World of Warcraft. It’s the formula you already know: NPCs with question marks over their head are waiting to give you quests, replete with text boxes and short snippets of benign flavor text; enemies stand around aimlessly in open fields waiting for players to come kill them; when you return to the quest giver you’ll be rewarded with XP which increases your level and grant you the ability to use new items and gear.

If it was a single player game this formula would probably bore us to tears. And yet, there’s an undeniable bit of magic that comes with feeling like you’re doing all of this in a persistent world with other players, a sense which is only enhanced by the immersive nature of VR.

And to that end, Zenith is making it happen. Playing since day one, it’s clear that the game is… well… it’s fully functional. It works… like technically speaking. That might not be saying much—were this ambitious game coming from a veteran studio—but considering that this is a brand new IP from a green studio on a relatively small budget, it’s at least worth recognizing that all the gears are in place and seem to be turning just fine.

Zenith doesn’t stray far from the MMO formula of yore and attempts to graft VR onto it in ways that are mostly successful, if not particularly well polished.

There’s two major classes in the game, the Blade Master and Essence Mage; the former being a sword-wielder and the latter being a ranged caster. Each class also has three sub-classes—damage, tank, and support—which come have their own abilities and intended roles.

Both classes wield their main weapons in fairly intuitive ways. As a Blade Master you swing your swords to slice enemies, and as an Essence Mage you use gauntlet-looking weapons to shoot at enemies from a distance.

Both classes can also make use of various abilities which are cast through a coarse gesture system which involves holding down a button and then swinging your arm up, down, left, or right (with different abilities depending upon which direction you choose). Compared to the use of primary weapons, these gestures are less intuitive and not terribly fun. The direction you gesture doesn’t really relate to the ability you’re using, and generally they just cause something to happen at your feet or give you a large circle to place on the ground where your spell will be cast.

While their primary weapons are pretty much point and shoot, Essence Mages have some spells which are actually thrown from the hand (like a baseball), which is a fun way to make casting more ‘realistic’ and dependent on player skill (there seems to be no auto-aim so you need to have decent aim).

The Blade Master class may have you swinging your swords with your arms, but the overall feeling of the melee combat is lacking compared to melee-focused games you may have played in VR elsewhere.

So far, the two other parts of the game that feel most specifically designed with VR in mind are climbing and flying.

Every surface I’ve found in the game up to this point is climbable, including huge mountains that you’d assume would be out of bounds. A stamina bar limits how far you can climb at any one time, but I found it was easy to scale an entire mountain because the game let me stay in place even when I had to let go to let my stamina recharge. It was clear I wasn’t actually supposed to bother climbing the mountain (as there were some holes in the terrain), but on the other side I could indeed see a brand new zone I had never been to, and I would have flown down to it if the game hadn’t warned me that my player level was far too low to bother.

Flying is done by simply holding your arms out to the side like you’re pretending to be a bird (no flapping required, fortunately). After just a bit of practice it feels very natural and quite freeing to fly in Zenith; even for short distances just by using the jump button and then gliding for a bit. Like climbing, flying is also limited by stamina, but you can cross significant distances (hundreds of yards) if you start from a high point. For the most part you can only descend from the point that you start, but in some cases the game encourages you to gain altitude by placing gusts of wind that lift you up and refresh your stamina.

From what I’ve seen so far, quests in the game have been pretty rudimentary in scope. There’s ‘kill this many of that thing’, ‘find this many of that thing’, and ‘go to these places’, or ‘kill this one specific enemy’. On their own they’ve felt mostly like a list of chores without much meaning behind them, but they at least create a framework for adventuring with others and maybe even finding a new friend or two along the way—thanks to this being a world full of other players.

In an MMO you’d have to say that immersion starts with the world that everyone inhabits. And on that front I’d say the look is passable. The detail is a little coarse throughout, but so far the art direction at least looks consistent.

Graphically, the game seems to suffer from the problem of trying to straddle the line between PC and Quest. On PC it doesn’t look quite as good as you might hope (and there aren’t many dials you can crank to make it look better). And on Quest it looks like things have been clamped down a good bit to make it run smoothly, including what looks like some auto-decimated assets that were chopped down too much. Had the game been designed for PC or Quest (and not both), the result probably could have been better, but there’s an argument to be made that less optimized graphics were a fair trade for game being cross-play so you’re more likely to be able to play with your friends.

Beyond climbing and flying—which work fairly well in the game to make you feel like you’re part of a solid world and also have some freedom within it—Zenith is otherwise lacking many immersive details.

NPC and enemy animations and behaviors are rough around the edges, giving them a sense of being puppets more than creatures. Items dropped from enemies or found in chests spawn as floating cubes with a name and an icon instead of looking like the actual item they represent. And once you pick them up they go into a classic flat-screen inventory that you control with a laser pointer.

The UI is almost entirely based on flat-screen paradigms, including your health, stamina, and mana which float in front of you in a flat plane alongside ability icons that show cooldowns with a text-based timer. There’s been many examples across the VR landscape of presenting this info in an immersive way, but unfortunately Zenith does little on that front. Haptics and audio in the game could also use a significant overhaul to better communicate to players when they’ve done something correctly.

Locomotion in Zenith is entirely based around thumbstick movement (save for the aforementioned climbing and gliding), and it expects you to do a lot of it.

Luckily the game has a wide range of comfort options and I appreciate that the game allows you to not only fully customize the vignette (AKA peripheral blinder) strength from 1–100%, but even allows you to do it on a case by case basis. For instance, you can set a 25% vignette for walking and a 50% vignette for flying.

While there’s no traditional teleport option, Zenith includes a fairly novel ‘third-person’ comfort mode which starts in first person and then (when you begin walking) shows you walking ‘out of your body’. Once you stop moving, your first-person view teleports back into your body at the new location. It’s an interesting idea and maybe a bit more immersive than a traditional teleport, but it seems disruptive to the overall flow of the gameplay so I doubt many will make use of it (it might ultimately be better suited for a different kind of game).

Generally speaking, and considering the comfort options at hand, I’ve found Zenith quite comfortable. I’ve yet to run into any instances of the player’s camera being overtly controlled by the game (ie: shakes or knockbacks by enemies), nor any environmental issues relating to comfort (ie: stairs that cause your head to bob up and down). The biggest risk in the game for those sensitive to artificial movement is likely flying and climbing, but fortunately you can choose to dial your vignette up for those things specifically if you find they are causing discomfort.

At its most basic level, Zenith ‘works’. The essential pieces of an MMO are in place and they’re working as expected and you can play it all using a VR headset. And that’s a great start considering how ambitious this project is for the small studio behind the game.

Were Zenith a single player game, I’d give it a pass pretty quickly. But there’s no denying the unique feeling of being in an interesting world with other players (and possibilities therein) which Zenith has so far managed to capture. While there’s much more the game could do to feel like it really belongs in VR, the ability to climb and fly helps make the world uniquely explorable in a way that MMOs typically don’t.

There’s more I want to see and explore in Zenith before I feel ready to give it a final score. Check back soon!