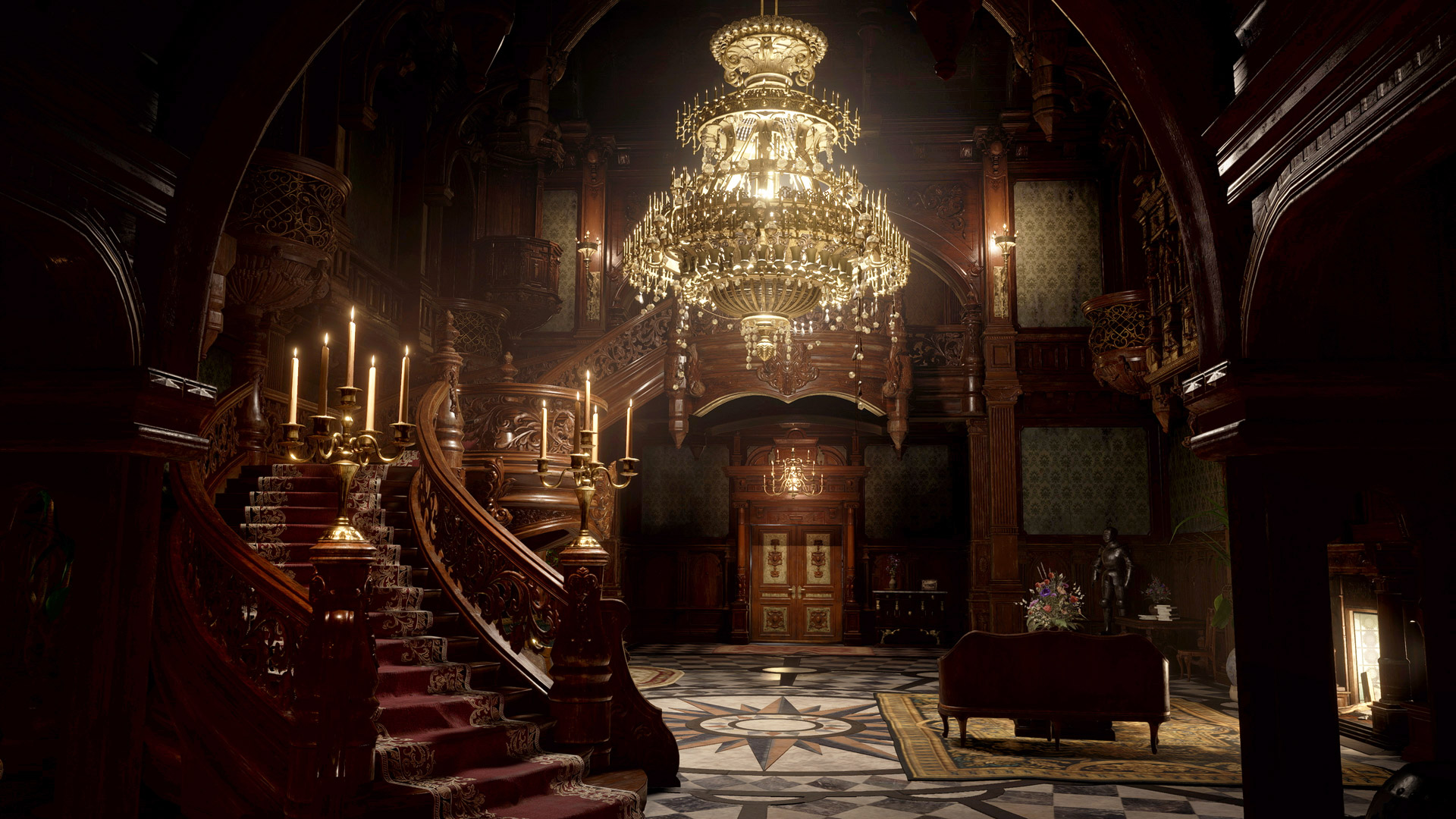 Earlier this month I visited Sony’s PlayStation headquarters in San Mateo, CA to see PlayStation VR 2 in person for the first time. Among the four demos I got to play was Resident Evil Village which is being fully ported to the headset.

Check Out Our PSVR 2 Hands-on Coverage:

When talking about the best graphics in VR I’d argue the top title is certainly Half-Life: Alyx. And while Alyx is packed full of detail, much of the game’s scenery is dilapidated buildings & debris or brutalist sci-fi architecture—not exactly the prettiest stuff to look at.

In my time with the game on PSVR 2 I was dropped into the castle of Lady Dimitrescu, an imposing vampire matriarch in concert with three evil daughters.

Even in the non-VR version of the game, the lavish interior of the castle is a sight to behold. In VR it’s a genuine feast for the eyes; the interior is packed with a density of detail that is simply unprecedented in VR.

The space is oozing with ornate wooden furniture, extravagant chandeliers, truly beautiful interior architecture, and an array of surprisingly competent artwork hung on the walls of the castle.

In the non-VR version of the game it’s all quite beautiful but most players aren’t going to stop to really breathe it in. In VR, I felt like I couldn’t stop but soak up the tiny details in the environment, even when they have nothing to do with actually advancing the game. Frankly, the space is so richly detailed and interesting to look at that if you removed all the ‘game’ parts of the experience to just let people explore the castle, it would easily stand on its own as an excellent museum-type VR experience.

Case-in-point: I was wandering down a hallway and stopped to look at a small picture frame on a side-table. In it was a painting of a crow silhouetted by a full Moon. I must have sat there and stared at the painting for at least a minute—easily able to lean in with the headset to see it up close—and it actually felt like I was sitting there appreciating a piece of artwork the same way I would at a gallery. In fact, I found myself impressed with all of the artwork on the walls of the castle. Not only were they seemingly all unique, they were also all genuinely good pieces of artwork.

Beyond the richness of the environmental detail, the game’s lighting is another reason why everything was so visually engrossing. There’s detailed little highlights across all the glossy furnishings that helps sell their shape and materials.

The dark interiors were definitely aided by the expanded contrast range thanks to PSVR 2’s OLED display. And while there aren’t many places where I’ve felt like the headset is truly ‘HDR’ (as Sony claims) I will say that looking into a fireplace did have a more significant sense of brightness to it, and so did looking at a window with its lace drapes awash with sunlight.

Thanks to the high detail of the lace and bright lighting, the drapes felt especially ‘real’ in a way that definitely made me stop and stare at a window that had no relevance to the gameplay whatsoever. I take it the headset’s ‘HDR’ effect works best with white light—which was the primary component of the fire and the sunlit drapes—because all of the sub-pixels are illuminated to make white (which means each pixel is putting out its maximum brightness).

And I haven’t even talked about the characters…

I’ve seen much of the non-VR version of Resident Evil Village previously including Lady Dimitrescu, the giant vampire lady, but in VR the characters are so much more viscerally creepy. Lady Dimitrescu is truly massive and imposing; seeing her right up in your actual personal space, including her very impressive facial animation, brings a level of fear and discomfort that perfectly serves the game.

Even the lesser characters, like Lady Dimitrescu’s three daughters, are a delight to witness thanks to their excellent animations and voice work that read really authentically in VR.

At one point one of the daughters was slowly pursuing me down a hallway when suddenly she dashed forward in a supernatural way that was actually pretty scary just to witness. Again, the great animations, combined with feeling like I was actually standing there thanks to VR, really synergize to create a frightening vibe.

Specific to the VR version of Resident Evil Village on PSVR 2, the game is using the headset’s dynamic foveated rendering feature (which uses eye-tracking to render in high quality only where you’re looking), ostensibly to keep image quality high even with the game’s generous helping of geometric and lighting detail. The feature seemed to work very well… I didn’t even notice it was turned on until I saw a bit of flickering in my periphery in one specific scene. This was likely due to some high contrast aliasing in my peripheral view due to the lower resolution outside of the center of my gaze. It’s possible this will be tuned further to be more subtle, but ultimately I think most people would probably not notice the effect enough to comment on it. That is assuming the headset’s eye-tracking has been properly calibrated for you and works well with your eyes. So far we don’t really know how well the headset’s eye-tracking will work across the population.

As for the actual ported mechanics from Resident Evil 8 to VR… in my brief time demoing the game I found that while it was a treat just to soak in all the excellent environmental art, interactions with the world were hit or miss. There are some select things you can reach out and touch, but most of the game’s smaller items are locked in place. I was happy to find I could smash most pots using my knife, but it certainly detracts from immersion somewhat when you try to shoot a wine glass or bottle sitting on a table and you just see a bullet hole appear with the object not even flinching.

That’s understandable, considering the game wasn’t built with the intention that players would be able to reach out and touch every object, but it’s still a bit of a shame the world couldn’t be as interactive as it is beautiful.

At least some care has been taken in adapting core mechanics for VR. Weapons can be manually reloaded and aimed, and even though it was clear there’s no physics happening when striking enemies with your knife, the reaction animations were at least convincing enough to make me feel as if I really hit them.

So far it seems the game’s cutscene moments take you right along for the ride with no special adaptation for VR comfort (except maybe stabilizing the horizon). At one point that meant I was being dragged quickly through the hallways by my feet and then strung up by meat hooks in my hands.

The scene was over fairly quickly though so it didn’t cause me much discomfort, though I’m curious to see if this will hold true for some of the game’s other intense cutscene moments.

After getting just a taste of Resident Evil Village on PSVR 2 I have to admit I’m looking forward to going back to soak in more of the game’s detailed world and characters and to have some scares along the way.

Disclosure:  Sony assisted with travel & lodging expenses to an event where information for this article was gathered.