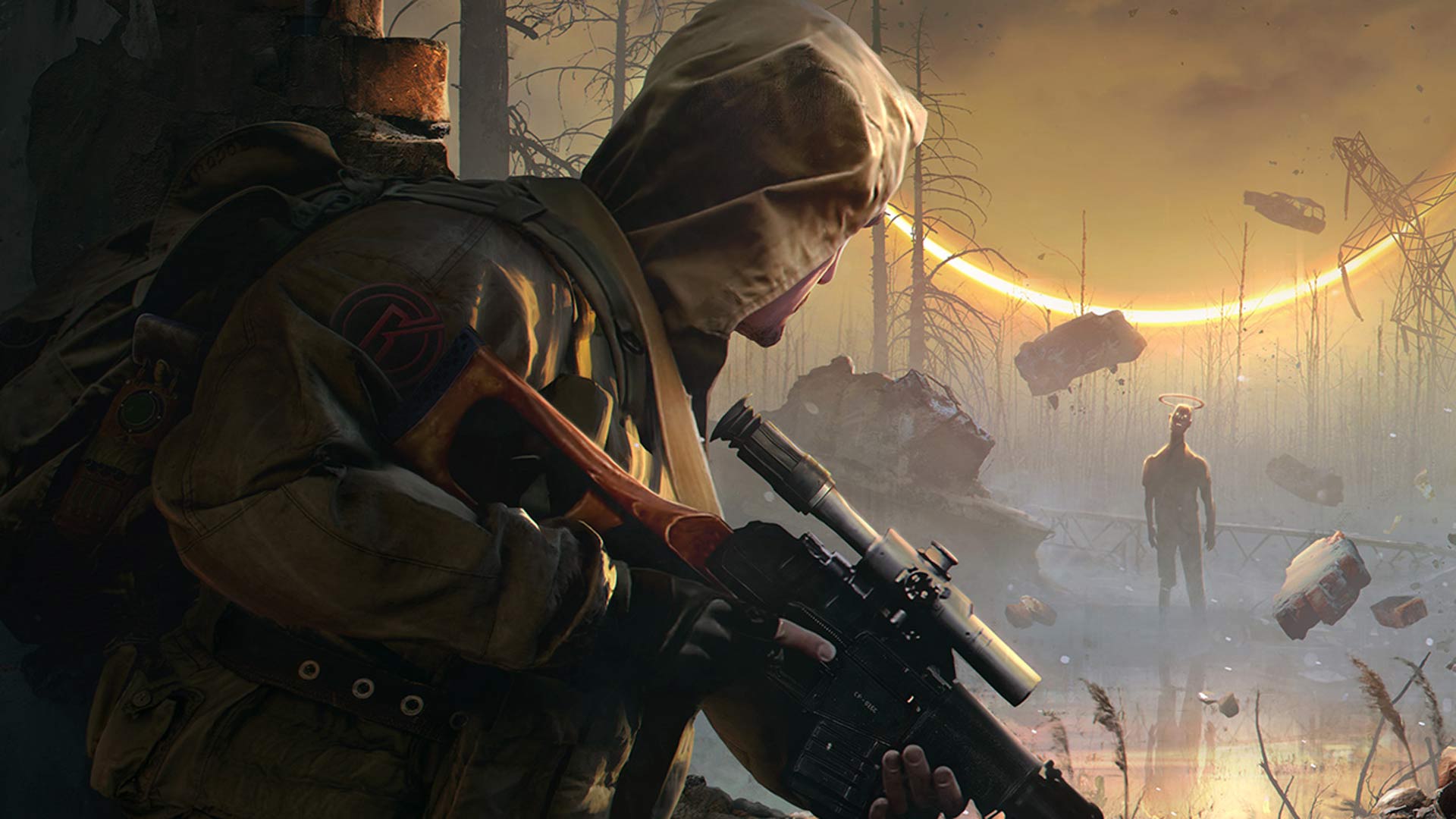 Into the Radius is a hardcore single-player survival shooter that you’ve likely already heard about from its time on PC VR headsets via Steam. In case you haven’t, the game serves up a unique mix of heart-racing encounters with deadly entities, a load of environmental traps, and its fair share of plodding tedium—all while paying homage to the suitably Soviet book Roadside Picnic (1972) and later film adaptation Stalker (1979). Although we were hoping for finer visual polish and a cleaner touch to object interaction, it seems the indie studio has done a serviceable job slimming down the 20+ hour game onto the humble Quest 2, cementing it as one of the platform’s leading survival shooters.

Into the Radius for Quest Details:

Into the Radius takes you to the Pechorsk zone which is a haunted collection of surreal landscapes filled with dangerous anomalies. It’s a bit like Chernobyl meets Salvidor Dali, with unmistakably Soviet architecture interspersed with impossible stuff like floating islands and explosions seemingly stopped in time. In short: it’s an absolute nightmare.

Only you can enter this so-called Radius to uncover the mystery of what happened, and follow the breadcrumbs left to you by a woman named Katya. No spoilers here.

You’ll have plenty of East Bloc-style firearms to contend with as you take on enemies ranging from slow walkers, called Fragments, to Mimics, which take on the form of soldiers capable of firing real bullets at you from afar. Environmental traps are also strewn throughout, oftentimes making the fastest route the deadliest. While enemies are well varied enough to keep you on your feet, it’s not just the bump in the night you should worry about.

Like any good survival game, a bunch of the action is dedicated to scrounging. With so much stuff laying around, you may happily forget there are actual missions to follow though, accessible through your terminal back at base. Whatever you’re doing, you’ll be grinding for the almighty ruble so you can fund your ammo, gun, healing, armor, hunger, and repair habits that you just can’t kick.

This intentionally slows down the speed of gameplay, forcing you to focus more intensely on what you need and where you’re going more than precisely what you’re killing; there aren’t any big bosses or point systems for killing baddies here: just aim well, fire and hope the sucker dies.

More often than not your mission objective is based around an item that needs retrieving, and if you can do that without firing a single shot, so be it. Though if you take too long skulking around the Radius, you’ll experience a phenomenon called ‘The Tide’ which resets enemies, items, and tosses you to a random place on the map. Best not to dillydally and have everything ready back at base before venturing out.

That said, there’s a lot more to worry about outside of creep-walking past baddies or delivering lead in center mass. Everyday tasks range from manually reloading each magazine with bullets obtained from ammo boxes, to cleaning your gun to keep it functioning properly. I can’t think of any other game where you physically have to keep track of, reload, and repair individual magazines to make sure they work correctly, much less clean your gun inside and out in the middle of a firefight because it might jam is it takes too much damage.

This is a level of tedium you may not be ready for, but I think it’s an overall positive. More on that in Immersion below.

As you’d imagine, this level of complexity gives you a ton to think about before even stepping foot outside of base. You’ll spend time planning missions, thinking about what extras you need, looking at the map, and really weighing your options before committing to a full hour-long mission, which can be put to an end with only a few well-placed shots from a Mimic.

The game’s heavy emphasis on prepping and maintaining stuff most certainly effects the pace of the game. You’ll need to think long and hard if baddies are even worth engaging, or if you’re better off sneaking around them for fear of wasting supplies.

As for combat, gun physics work mostly as you’d expect them to, with breechloading shotguns snapping back with a satisfying click. All guns require manual reloading, which includes charging bolts, pulling back slides, turning off safeties, etc.

As with all objects in the game, manual interactions (more on that in Immersion) with guns can be hit and miss, so concentrating on each and every item and its singular ‘grab’ point among a sea of other equally grabbable item can be a challenge.

Thankfully there’s a great range of small arms, spanning WW2-era guns like the Mosin-Nagant M38 rifle or Tokarev TT-33 pistol, to modern battle weapons that you can deck out with all of the Christmas trimmings, like red dot scopes and telescopic scopes of varying power.

You also have to pay close attention to the caliber of bullet you need for each gun, as you may find some lose bullets laying around that may or may not work in your sidearm or main weapon. Basically, if you don’t know the difference between 7.62×54 and 7.62×51, you’ll have a steeper learning curve than someone who knows their guns and ammo.

Visually Into the Radius is well varied, with each sector bringing its own creepy vibe and environmental anomalies to differentiate it from one another. Some areas begin to feel just a little too muddy and geometrically blocky to be consistently immersive at times though. Inconsistent lighting also makes it feel more cartoony than it ought to be at moments, although it’s clear the developers are bucking up against the boundaries of the humble Quest 2’s mobile processor.

Object interaction is sadly not a strong point either, as you’ll find yourself highlighting your invisible cursor over items in hopes of force-pulling the correct one. A jumbled backpack becomes an even worse experience as items clip into one another, becoming a chore to physically individuate.

Below you’ll see me struggling with a food tin. You need to grab it, peel back the lid with the opposite hand, take a knife and pick out a piece so you can eat the food. The overall complexity of the action isn’t the issue, but rather finding that perfect attach point and completing the task.

This isn’t a constant occurrence—you can learn to basically finesse each object’s attach points—but it happens often enough to keep you on your toes about when to fumble with objects…kind of like real life. If I were being really generous, I might even look at the bug as a feature in this case, i.e. you need to build expertise throughout the game with handling even the most mundane objects before you can confidently change a mag, fill up and old one with bullets, stick yourself with a healing syringe, and eat a quick lunch. Still, some more intuitive object interaction would do well to flatten the game’s learning curve.

Despite this, Into the Radius delivers all of the right broad strokes for a VR native. Almost everything is interactive, which means you can toss basically anything you can find in your body-worn holsters or in your trusty backpack, which gives you free range to store and organize stuff. It abstracts away very little, leaving you to contend with the world more or less the way you might if you were really in a deadly East Bloc exclusion zone.

Above all though, Into the Radius excels at treating every situation with deadly seriousness, and a part of that seriousness is a level of built-in tedium. You need to reload magazines bullet by bullet, which can be done either by physically picking up bullets and putting them into the appropriate magazine or holding the ammo box to the magazine for a more automatic fill-up. You need to keep those empty magazines close by to fill up later too. Don’t just scatter them on the ground in hopes of finding more!

It’s this core expectation that the user be aware (and beware) of everything they’re doing which makes Into the Radius a triumph over so many other survival games in VR, even if some of the finer bits feel like they need a polish.

Into the Radius features all of the major VR comfort options, so most everyone should find it a comfortable experience. Level design is such that users will need to do a lot of walking and running around, which means you’re in control of how and when you move through the world at all times.