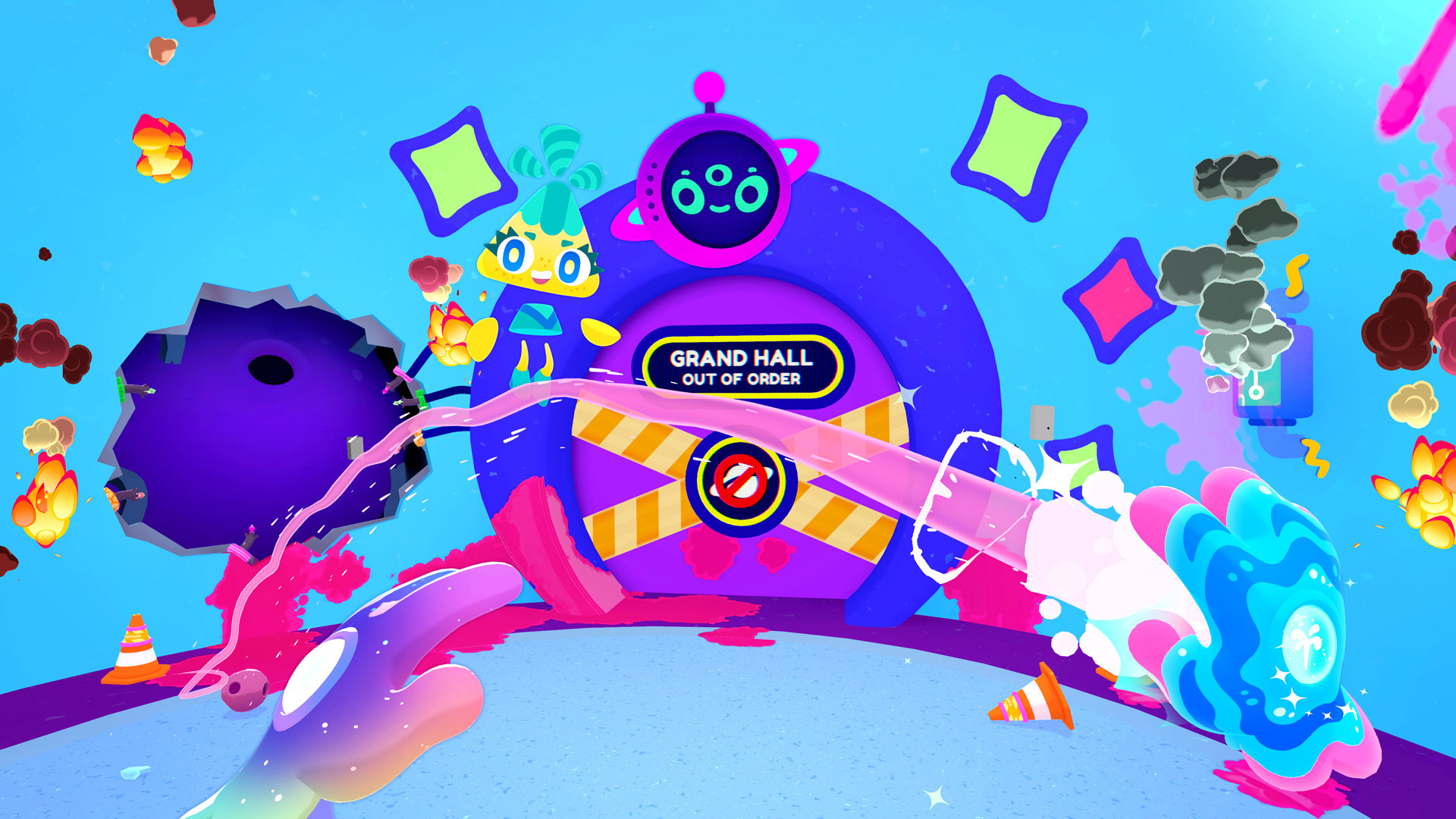 Google’s VR studio Owlchemy Labs is back with its signature ‘play with everything’ approach to VR in Cosmonious High. As a student in an alien high school you’ll discover a bevy of fun powers and objects to play with. After graduating from Vacation Simulator, does the studio’s next game get a perfect grade? Find out in our full review of Cosmonious High.

Although the game diverges in setting and structure from Owlchemy Labs’ prior games—Job Simulator (2016) & Vacation Simulator (2019)—Cosmonious High shares lots in common with the Simulator series. In particular, Cosmonious High is densely packed with all kinds of interactive items that cohesively respond to the rules laid out in the world, creating a canvas for experimentation.

In Cosmonious High you take on the role of a Prismi, a novel alien creature which can manifest various powers—like the ability to shoot water, wind, or fire from you hands. The entire game takes place on your first day of school where things go a bit awry and it’s up to you to fix them.

Beyond just fixing what’s broken, you’ll step into unique classrooms where you’ll learn how the world works, complete assignments, and acquire new powers as you go. Throughout, you’ll be prompted to experiment with the rules of the world and the items around you.

Through ‘assignments’ in each classroom you’ll interact with the game’s tight-knit cast of alien characters and complete various tasks to the satisfaction of your teachers.

Take Chemosophy class, for instance, where players mix and heat various liquids to discover new compounds which do interesting things. Bouncium, for example, can be poured on pretty much any object in the game to make it bouncy. Same goes for Stickium, which causes items to clump together into a big sticky ball. And from there the game encourages you to continue experimenting and exploring by combining different compounds to see what else you can come up with.

And that’s the essence of Cosmonious High—experimenting with the rules of the world to see what what happens. You’ll need some natural curiosity to get the most out of the game.

And the fun part is that something almost always happens. The depth of interactions on display between the player and the world (including the characters), goes far beyond what’s seen anywhere else in VR.

Your powers, for instance, seem to interact with nearly everything. You can use your water spray to push items around or wash them off after painting them. You can use your ice power to freeze objects and then use your fire power to melt them. At one point you’ll get a ‘thought reading’ power which allows you to target pretty much anyone or anything in the entire game and you’ll get a thought bubble which tells you what it’s thinking.

The world of Cosmonious High is very good about letting the player do things that seem logical given the established rules. For instance, I came across a small puzzle which required that I light a fuse on fire. At this point in the game I hadn’t acquired the fire power, however I had smuggled a Bunsen burner out of Chemosophy (by stashing it in my backpack); to my delight, the game let me use the Bunsen burner to light the fuse and complete the power, rather than making me wait to get the fire power later in the game.

But Cosmonious High’s gameplay almost never rises above ‘guided sandbox’. You’re given a world full of interesting items and logical mechanics, but what you’re asked to do with them is really never that fun or challenging. There’s rarely a satisfying climax where you put everything you’ve learned to the test—a strange choice for a game designed around a ‘school’—or where all the mechanics come together in ways that make them feel especially synergistic. For the most part you’re just listening to simple instructions and interacting with the game’s characters.

While the game’s characters are well designed, differentiated, and as interactive as the rest of the environment, their overtly chipper attitude and banal conflicts really feel like the kind of thing you’d find in a kids show.

In fact, Cosmonious High overall feels like a game designed for children. The world as portrayed feels like a pre-teen’s notion of what a fantasy high school could be like. And while there’s no problem with games for kids, it’s an odd audience to target considering the game’s key platform, Quest 2, is explicitly for kids 13 and older. When I imagine an actual high-schooler playing Cosmonious High I envision a lot of eye rolling.

For me (since I’m not… ya know, 13) this is a shame because Cosmonious High is a brilliant game from a technical standpoint. It’s visually sharp with excellent art direction, voice acting, character designs, interactivity, affordances, and ridiculous attention to detail. And it runs great on Quest 2, even with a heavy emphasis on heaps of physics items. It’s really just missing more solid gameplay to support the sandbox and task-completion elements, while being relatable to a more general audience.

It took me around six hours to complete Cosmonious High, having done about 80% of the game’s optional content. Optional content comes largely in the form of collectibles and optional tasks. There’s trading cards to find, broken lights & pipes to fix, stamps to collect, and Blebs to discover.

Blebs are downright adorable spherical critters that you can find throughout the school. For as damn cute as they are, I was sad to find they didn’t really serve any purpose other than being unbearably endearing.

Cosmonious High is full of rich interactivity the likes of which is rarely seen elsewhere in VR. Rather than traveling across distant but sparse lands, the game packs a smaller area to the brim with things to touch, see, and play with. Food can be eaten, containers can be filled with liquid, paint can coat surfaces, instruments can be played… in multiple ways.

At one point in Chemosophy class, I learned how to make the game’s version of coffee, which then allowed me to dispense it from a machine that could dispense any of the compounds I’d discovered so far. After filling a beaker with it I wondered if I could simply lean down and drink it straight from the spout. Sure enough I could! Just one of a thousand little interactive details the folks at Owlchemy had the foresight to include.

Interactivity really is the name of the game; if it looks like you can touch it, you almost certainly can.

And it isn’t just the items. Characters are charmingly reactive too. Spray water at them and they’ll spit it back at you. Try to freeze them and they’ll react physically and with dialogue. Throw something to them and they’ll catch it. You can even give them a first bump or a high-five.

You can also talk to characters in a simple but effective way. When you approach one, reach for your mouth and you’ll pull out a bubble filled with icons representing your dialogue choices.

And what school is complete without a backpack? Reach behind you and pull out your backpack which conveniently stores your inventory, lists of collectibles, and even a camera which you can use to take in-game pictures (which also enter into gameplay). The backpack also lets you store items to take them between locations.

Cosmonious High uses a Half-Life: Alyx-like force pull system where you can target distant objects with your outstretched hand, grip to select, then pull to launch the object into your hand. It doesn’t feel quite as refined as the Alyx implementation, but it works pretty darn well and it remains my favorite variation of force-pull to date.

Cosmonious High supports only teleport movement and snap-turning and is exceptionally considerate of comfort throughout. I can’t recall a single moment during gameplay where the game itself did anything that made me feel dizzy or disoriented. While this is a bummer for the ‘only smooth movement’ crowd, moving itself isn’t a huge part of the gameplay (most of the time you’re at a station doing things with your hands), so this might not be as detrimental to the experience as you might think.

The game has no qualms about letting you push things beyond the performance limit on Quest 2 which can seriously tank the framerate to unplayable (and uncomfortable levels).

While nothing in the game that I was ever prompted to do would reach that point, those with some patience can easily spawn more objects than the game can reasonably handle.

Luckily there’s plenty of trash cans spread throughout which you can use to demolish any performance-hogging creations and get right back up to speed.