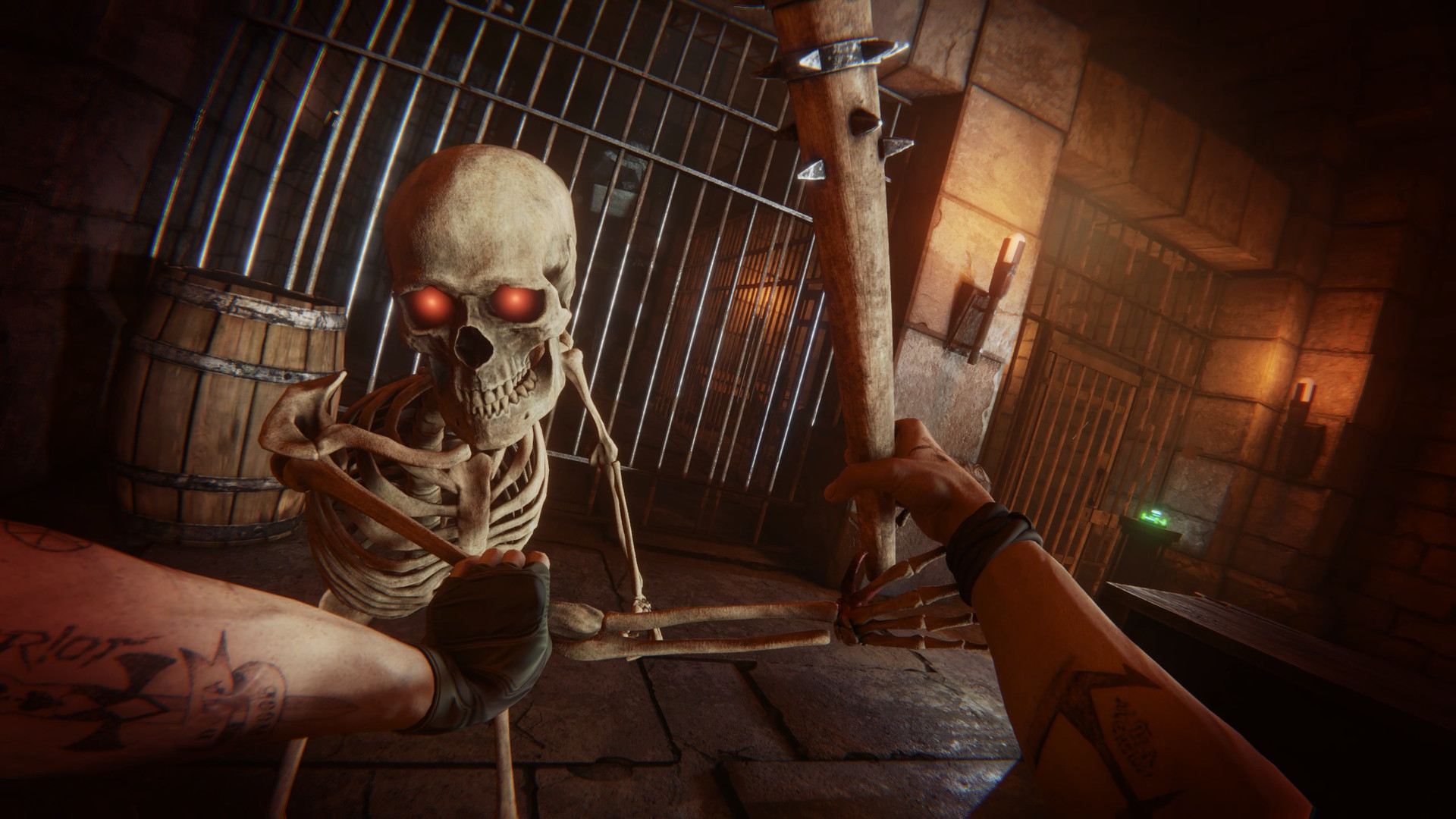 Bonelab, the latest title from veteran VR developer Stress Level Zero, brings the core of Boneworks to Quest 2 for the first time, but beyond that does little to improve its foundational gameplay. This time, however, a fully-featured modding system could save the day.

Bonelab’s gameplay is functionally the same as its predecessor, with highly physics-driven gameplay that can be both magical and bothersome. This time around, however, the game more clearly communicates its sandbox intentions and offers up official modding support with the hopes that its community will bring the fun.

Unlike Boneworks—which made players play through some nine hours of campaign before giving them access to sandbox mode—Bonelab walks players through each of its non-campaign mini-modes which include things like time trials with both combat and parkour, a full-blown sandbox for spawning enemies and items, and some experimental mini-games like physics bowling. It’s a good idea as it shows players everything the game has to offer up front.

Bonelab really doesn’t hold your hand, which some may appreciate and some may not. Once you reach ‘The Lab’ part of the game with the various mini-modes, you’ll need to explore and pay attention to your surroundings to figure out how to actually unlock the campaign mode.

After you give each mode a try (and figure out a little puzzle) you’ll unlock access to a 5-6 hour campaign mode which I found to be a largely dull affair which repeated almost all of the same mistakes as Boneworks. Rather than rehash them, let’s go through a quick summary of the critiques:

The one truly new and interesting thing that Bonelab does over Boneworks is the addition of the quick-swap avatar system.

Switching between avatars gives you unique physical advantages & disadvantages, like being fast & weak, strong & slow, or tall & lanky. And you can switch between avatars on the fly with a ‘pull cord’ system where you reach for your arm and pull a little ball longer and longer to cycle through and select your avatar with one quick motion.

I find this particular interface to be very smart—it’s quick, fun, and easy to do. The one tweak I would make is to raise the pitch on each sound effect to further associate a specific pitch with the selection of a specific avatar. I would have loved to see Bonelab push further into this kind of novel interaction design that directly interfaces with gameplay.

And while it’s also a very smart idea to allow players to hop between avatars with meaningfully different capabilities, I didn’t find that the game really plays to this as a core mechanic in its level design. In most cases the avatar you should use for the given task is plainly obvious and there’s not much room for creativity—whether that be in a specific enemy encounter or puzzle. It’s a shame too because you could easily build a whole game around this avatar swapping idea.

So… I didn’t love the game’s campaign portion. But what about its sandbox modes?

Unfortunately they fall prey to the same issues as the campaign. The core issue is that this sandbox is missing truly fun toys.

Yes, you can spawn almost any of the enemies you encountered in the campaign… but they aren’t very fun to fight. And sure, you can spawn any gun… but again they function so similarly that it’s just not that exciting to have the arsenal at your fingertips.

Looking back at my Boneworks review, I find that Bonelab’s core gameplay can unfortunately be summed up in the exact same way:

Boneworks unfortunately doesn’t transcend the sum of its parts; it fails to find any compelling interplay between puzzles and combat, and misses the opportunity to build a set of core concepts which lead to a climax in mechanics, gameplay, and story. Instead it feels like piecemeal gameplay scenarios strung together atop a novel technical foundation with a sprinkle of narrative.

However, there’s a big “but” here. Unlike its predecessor, Bonelab has official modding support on day one. The studio promises that players will be able to import avatars, items, vehicles, and even entire levels. That means there’s potential for the game’s community build new content for the game—to bring new toys to the sandbox.

And it’s this which will make or break Bonelab in the long run. The developers have described their intent to offer the game up as a foundation for VR experimentation. If that catches on, Bonelab could one day be a much different experience than it is today.

Despite the various critiques above, I will say that I’m impressed with how Bonelab looks and performs on Quest 2. It’s not the best looking game on the headset, but the essential look and feel of Boneworks has translated nearly perfectly to the headset, including some neat trippy visual effects. Performance unfortunately isn’t perfect on the headset, with some later scenes slowing the game down here and there. Granted, I didn’t feel the hitching was enough to really impact my gameplay, though occasional crashes were a nuisance.

Oh and the soundtrack is once again a jam.

One thing Bonelab definitely does right is create a consistently interactive world. Aside from the walls, ceilings, and floors, pretty much anything that exists in the game world is physics driven and can be interacted with.

That means you can do intuitive things like push open doors with the barrel of your gun, press buttons with your virtual elbow, or toss enemies over a railing to their impending doom. You can slam a door into an enemy to deal damage, catch an ejected bullet casing out of the air, or use a shovel to scoop up items and move them about.

This is often made much more fun with the help of the game’s always-available slow-motion which gives you more time to think about the actions you want to perform. For me most of the game’s fun came from using slow-mo to do cool action stuff like jumping from a platform and shooting enemies on the way down, flipping a gun from one hand to another for a cool reload, or watching my fist connect with an enemy’s face at full force.

But outside of slow-mo, things feel a bit bland. Shooting is a mere point and spray affair and melee often feels like a less satisfying version of Blade & Sorcery. Slo-mo is the key tool to make any of it fun, mostly by directing your own visual spectacle or challenging yourself to do some crazy move.

While the physicality of objects in the game is pretty solid, your body itself often feels like a floppy mess. Basic things like jumping and climbing are much more often frustrating than not, which makes it perplexing that the game loves making you climb and jump. Even straightforward things like climbing ladders and scrambling up a ledge can be inconsistent to a bothersome degree.

And this exemplary of a broader issue with Bonelab. The game is so busy wondering if it could make everything physics-based that it hasn’t stopped to consider whether or not it should. Sometimes the game’s physics approach makes the game more janky and less functional.

Take, for instance, the occasional weapon chest you’ll find in the game. It has a nice red handle so you know where to pull to open it. But when you do, half the time you also move the entire box, sometimes flipping it over and spilling out the contents. Boneworks had this exact same issue when it launched more than two and a half years ago.

And sure, that might be ‘physically correct’ given the game’s understanding of the forces involved, but it’s almost universally not the thing the user intends to do when they grab that red handle.

Bonelab would be a better game if the studio was more strategic about when to use physics to drive interactions and when to make exceptions for the sake of usability.

The red handle on the weapon chest is but one example of an issue that came cleanly from Boneworks to Bonelab—the game’s holster system also remains quite annoying with several obvious design issues that could be addressed with just a little bit of attention.

Bonelab is unabashedly an intense game as far as comfort goes. The game warns players up-front that they should have serious VR experience before trying the game—a warning that everyone ought to heed.

The game doesn’t avoid gameplay that commonly results in discomfort: things like launching you through the air, smooth turning on vehicles, dropping you from great heights, or having you slide down long curvy stretches of pipe. Not to mention a literal rollercoaster ride.

Compared to its predecessor—which at launch had an exceptionally springy feeling to its climbing which gave me the worst case of proprioceptive-disconnect that I’ve ever experienced—Bonelab fares a little bit better with its climbing. It’s still shaky but not nearly as bad as the original.

Bonelab has seemingly no limits to its sandbox mode which means you can potentially slow the game to a stuttering mess if you spawn enough items; the choppy framerates can cause discomfort, though the game never forces this situation on you.

If you consider yourself generally sensitive to artificial motion you should think twice about playing Bonelab; do recall that both Meta and Steam have reasonable 14-day return windows if you haven’t played the game for more than two hours, so you can always give it a try to see if it works for you or not.