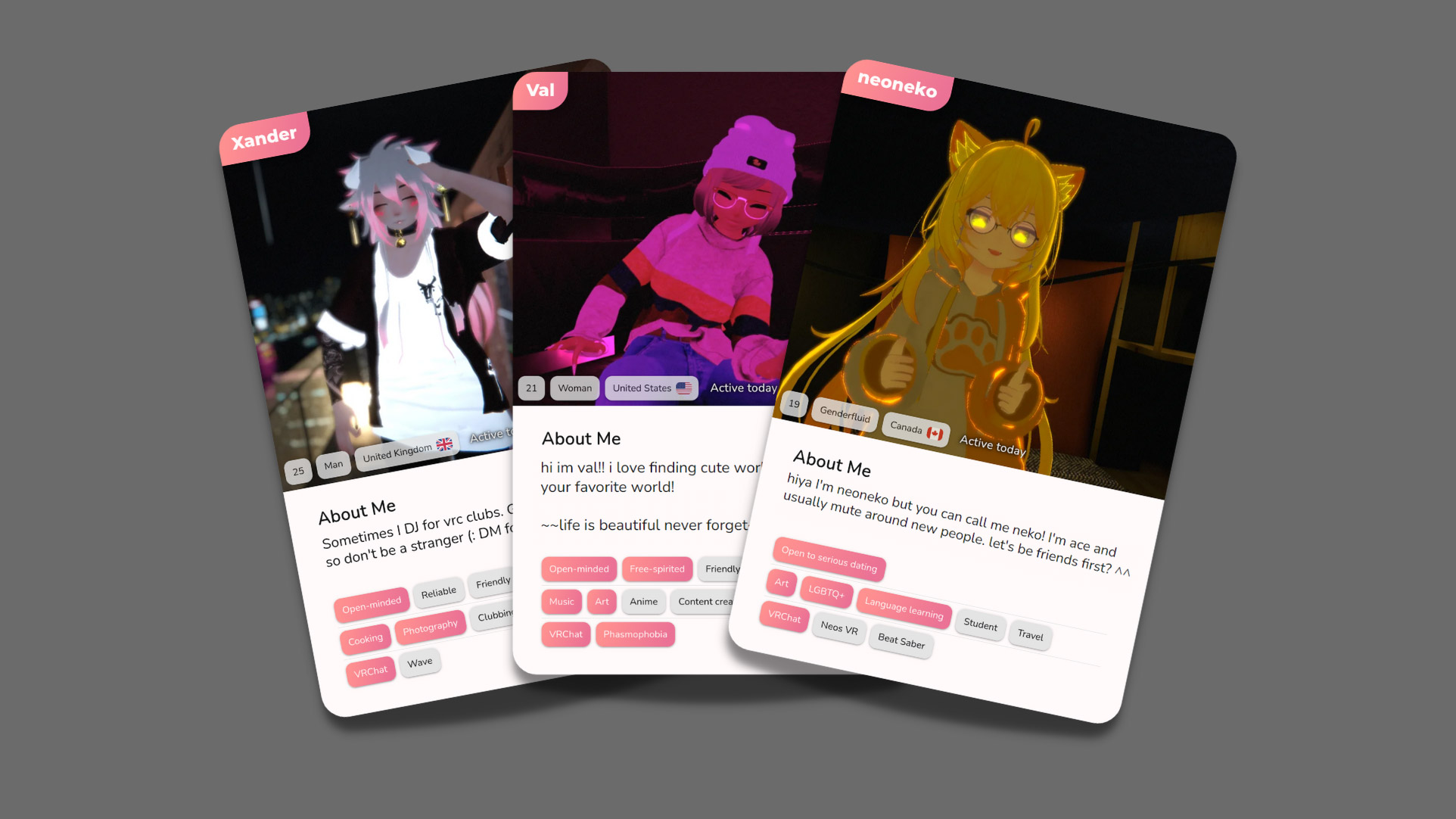 Flirtual is a dating app designed to match VR users together and to facilitate dates in social VR applications. The creators say it’s a codification of a trend that’s already happening—people meeting in VR and going on to form real-world relationships.

Finding real relationships through online games is nothing new. For at least a few decades now, players in virtual worlds like Runescape, World of Warcraft, and Second Life, have formed virtual friendships and partnerships that often carry over to the real-world.

The same has of course been happening in VR, and while the games of yore saw players communicating mostly by text and voice, VR of course ups the ante with the feeling of being physically present with others as well as bringing a significant portion of body language into the mix. Although VR users are still represented as avatars—which generally bare little resemblance to their real selves—VR makes the experience of interacting with people in virtual worlds objectively more rich; far from doing a /dance emote in an MMO, VR users can actually dance together and some use that added immersion to get even more intimate in VR.

That added realism makes VR the ideal platform for forming real-life relationships, say the creators of Flirtual, an online dating app which is designed to match VR users based on their interests and then facilitate a meetup in VR.

Rather than being its own self-contained social VR app, Flirtual is actually a non-VR app (currently available on Android, Windows, and browsers) which serves to match users who can then decide on their own where and how to meet in VR. The creators say most of the app’s VR socializing is presently happening in VRChat.

The Flirtual app itself will be familiar to anyone who has used a modern online dating app, with a few caveats.

Instead of pictures of themselves, Flirtual asks users to upload photos of their avatar (or avatars). The sign-up process involves typical questions like what you’re interested in, and what kind of person you’re looking to match with. And while there’s the expected ‘Sexual Orientation’ field, you’ll find ‘Experimenting in VR’ among a range of more common options. Also specific to VR, Flirtual asks which VR equipment you own and what your favorite social VR apps are.

While it might seem strange to match with other users when only knowing what their VR avatar looks like, the creators of Flirtual say that, for many, that’s part of the appeal of VR dating.

“When you choose how you look [via your avatar], it’s personality that makes the difference,” the developers assert. “[Flirtual is for a] vibe check in VR before sending IRL pics or video calling.”

Beyond matching users in the app, Flirtual also hosts speed dating and social events in VR.

Flirtual fo-founders Anthony Tan and Kyle Farewell say their desire to facilitate matches among VR users comes from their own experience with VR dating.

“Why are we doing this? Because VR has changed our lives. Honestly. It’s helped us come out of our shells, meet some of our best friends, survive quarantine sane, and fall in love.”

Farwell says he met his girlfriend of two years in VRChat, and the pair recently moved in together.

Flirtual is a re-launch of a similar service that Farwell started in 2018 called VRLFP (Virtual Reality Looking-for-Partner). After bringing on Tan as CEO the duo worked to launch the modern version of Flirtual, which also includes the ability to search for new VR friends rather than specifically seeking romantic connections.