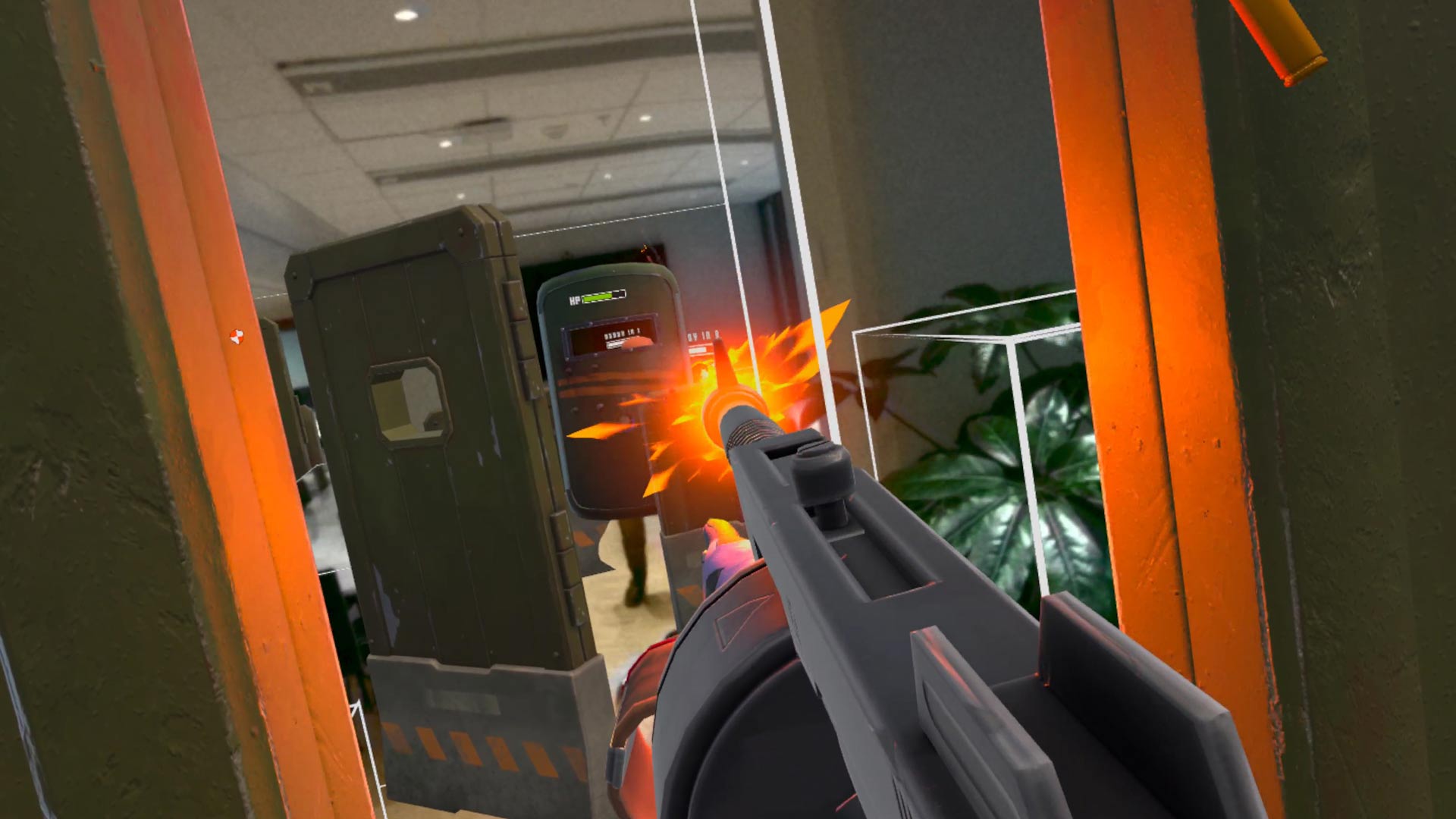 Spatial Ops is a new multiplayer mixed reality shooter from Resolution Games, the studio behind Blaston, Demeo, and Ultimechs. It’s out now on SideQuest and you can play in the open beta for free starting today, however we got an advanced look during a trip to the developer’s Stockholm-based studio, which thankfully had a big enough area to host all-out 4v4 matches.

In short: Spatial Ops is bringing an arcade-level VR team shooter experience to consumers in sort of the same way Space Pirate Arena did, albeit with way more players and a greater ability to configure play spaces. It also hopes to ignite a new eSport thanks to some familiar shooter mechanics that basically anyone can pick up just as easily as grabbing dual Tommy guns, or a rocket launcher and blasting away.

Ok, there are more technical bits to think about, but more importantly you probably want to know how we got on with Spatial Ops.

Spatial Ops made for some intense and fun battles—the sort of stupid fun that makes you forget you should be seriously previewing a never-before played game instead of getting on the ground and worming your way under a hail of gunfire and laughing like a madman all the way.

The game supports up to eight players using either Quest 2 or Quest Pro, although you can go it alone with bots if you’re lacking the requisite number of brains attached to headsets—at least one besides you for either a mano a mano duel, or a bot-hunting extravaganza. It’s an in-development project, so I’m sure we’ll see a more refinement as the team continues work, but the game already has all of the basic bits in place to make for one hell of a fun time.

Here’s a gander at the release trailer, which is actually very representative of the time we had in Stockholm:

What the trailer doesn’t show is that spawn points are placed on opposite sides of the arena, so teams will not only start there before the match begins, but also need to individually trundle back there to respawn—provided you didn’t manage to toss a healing vial at your feet for an extended run, that is.

You can pick those health packs up along with randomly selected guns at specific spawn points throughout the playing field. You’ll be able to arm yourself with Tommy guns, revolvers, shotguns, sniper rifles with working scopes, rocket launchers, grenades, and a riot shield that adds the only opportunity for armor in the game. Once a gun is empty, just toss it and head for the nearest weapon spawn point.

We played a ton of matches, which not only gave me a good feel for each weapon, but also for how tiring it can be to sprint around what to outsiders looks like an empty room. To us though, it was crammed with virtual crates and barriers to hide behind, which made for some natural choke points where the action really popped off.

All of that can be configured in a level editor beforehand though, which gives you a lot of latitude to customize the playing field to the intended place space. As you’d imagine, tactics change according to the game mode you’re playing too. At launch, there are four modes available: Team Deathmatch, Domination, Capture the Flag, and Free-for-All.

We played on both Quest 2 and Quest Pro, although there’s some unexpected advantages to Quest 2 here thanks to its monochrome passthrough. Spatial Ops is a mixed reality game that necessarily fills a lot of the playing field with virtual imagery, so in this case passthrough really only gives you a clear idea of where not to go. Enemies and barriers ‘pop’ more on Quest 2, although you can’t deny how much more immersive the full-color passthrough of Quest Pro is, adding just a touch more realism to the whole thing.

Since Meta hasn’t released concurrency for Quest, which means Quests can’t ‘see’ each other in a shared space, the game needs a common reference point to calibrate each user to the playing field. In our case, it was a pillar on the side of the room that every player had to carefully make sure was lined up just right. It’s crucial to get calibration correct, otherwise your perception of a player’s virtual position in the game and actual position on the field may be off, which would cause unwanted contact between players.

Here’s a good look at how that’s done:

The headline says ‘At-Home Play’, but that’s really only applicable if you have ready access to a big space. That’s a distinct barrier of entry alongside needing an adequate number of VR headset-owning friends for full effect.

We played in an area around 10×10m (33×33 feet), which was notably larger than the Quest 2’s guardian typically allows, hence the need for distribution on SideQuest and not the Quest Store proper. If you’re like me, you probably only have a space just big enough for room-scale VR stuff; in some ideal future, everyone I know has an MR-capable headset and we all meet up at the local indoor basketball court for a few matches. Online play is possible provided each user has enough space, although Spatial Ops is really a local multiplayer game in spirit.

In the end, Spatial Ops is opening up arcade-style gaming to the general public, which will be interesting to see unfold. Are there enough Quest 2 or Quest Pros out there for the game to make sense as an eSport? Will players find each other and auto-organize into local teams, matches and maybe even tourneys—like you might see with the obvious analogues of airsoft, paintball or laser tag? We’ll be waiting to see, but in the meantime you can nab Spatial Ops on SideQuest for free to try out for yourself.