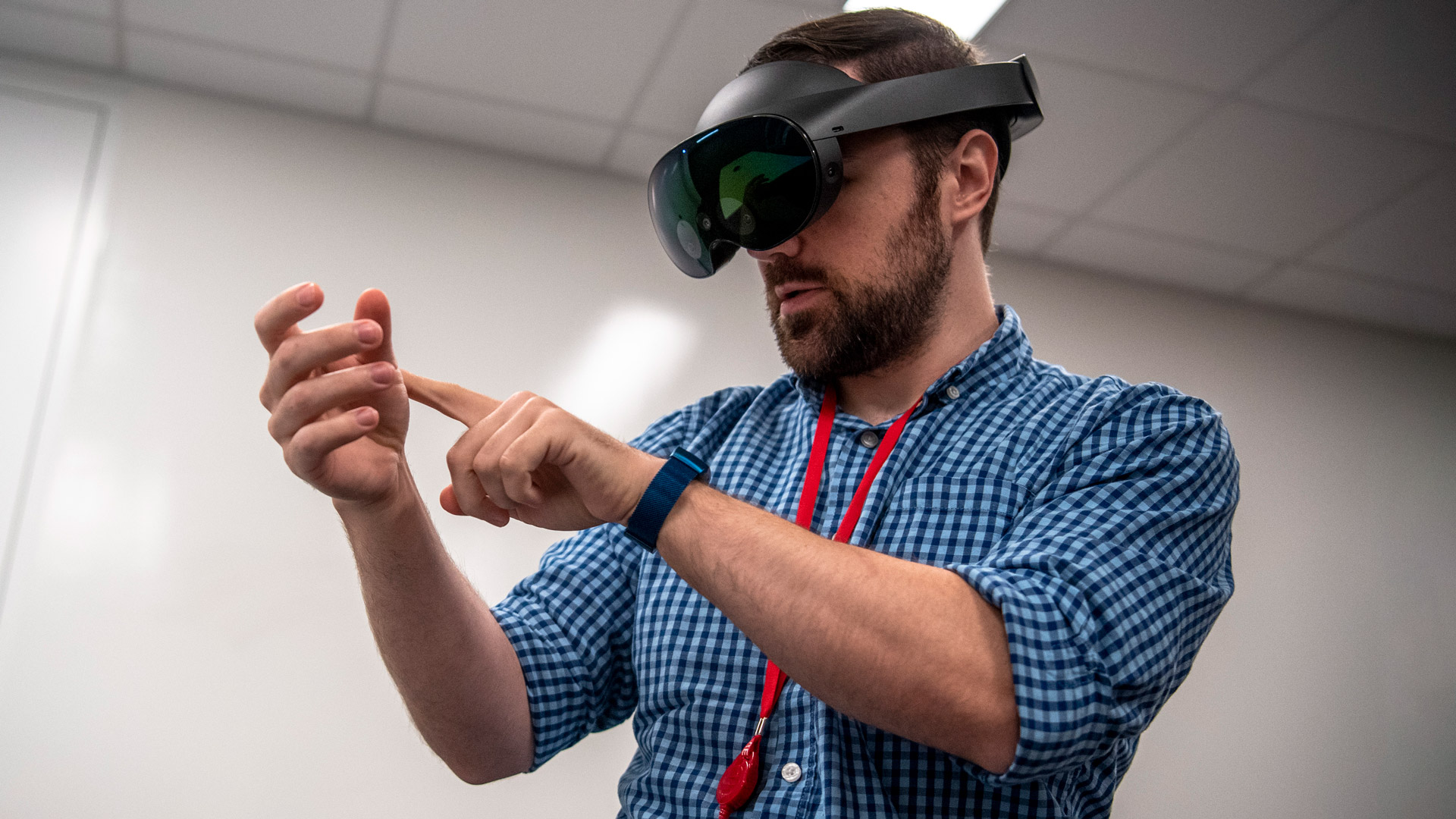 Quest Pro has finally been revealed and we were lucky enough to be among the first to get a hands-on demo with this interesting new standalone MR headset.

We’ve always called Quest 2 a VR headset. Because, while it has gained some passthrough AR capabilities since launch, it was still clearly far better at VR than AR—and most of its actual usage reflects that.

Quest Pro, on the other hand, is the first headset from Meta that warrants being called a mixed reality headset—it’s fully capable of VR, AR, or any combination between.

That’s largely thanks to new sensors on the headset which provide a sharper passthrough view that’s also finally full-color and a more accurate representation of the world around you. And with an ‘open’ peripheral design to keep your virtual view connected to the real world, Quest Pro is really opening the door to serious AR experiences. But it will be some time yet before developers discover what’s truly compelling with this kind of AR.

In a recent visit to Meta’s offices to check out Quest Pro for myself, the company ran me through a handful of demos. Compared to the usual VR demo—where I put on the headset and the developers outside turn into mere voices from another plane—I could put on Quest Pro nearly without an interruption in our conversation. That’s because once I put on the headset I saw a reasonably high resolution representation of the real world around me that felt real enough that I could easily keep chatting as if there wasn’t a slab of technology between my eyes and theirs.

Though it felt like I was still standing there next to them, now that the headset was on, I could suddenly manifest bits of the virtual world before me. Compared to the various transparent AR headsets I’ve tried previously, the wider field-of-view and fully opaque virtual objects around me felt far more solid and ‘there’ in the room with me, though this comes with the not insignificant tradeoff of reducing the resolution of the real world.

It’s clear that Quest Pro’s MR capabilities are powerful… but it’s going to be a while yet before the industry at large understands where and why to use AR, VR, or a combination of the two when presented with one device that flexibly provides all of those options.

Most of the app demos I saw naturally benefited from the use of MR simply by allowing me to feel like I didn’t completely leave the room the moment I put on the headset. That makes ‘simple’ apps more appealing, like Painting VR which essentially lets you pop up a painting studio in the room you’re in. With passthrough AR you can even arrange your virtual workspace around you real room, working around obstacles and even placing virtual brushes on a real table. It’s a nice novelty, but I not an essential addition to the app.

And that’s the case with most of the Quest Pro demos I’ve seen so far. Essentially you’re getting a reasonably high resolution passthrough background under your VR app, which makes you feel a little more at home for apps that don’t benefit from taking you completely out of the real world.

But Quest Pro isn’t just Quest 2 with passthrough. In addition to being significantly more compact, Quest Pro also understands much more about you.

Thanks to internal cameras watching your eyes and face, the headset is capable of giving your avatar more realistic expressions that clearly move the bar in terms of natural-feeling social interactions in VR.

Using the new sensors, the headset creates a model of your face—it’s not just your eyes and your mouth moving, but whole expressions. Meta has created an impressively well rigged model—that will be available to developers—that moves your cheeks, nose, and brow.

Although Meta’s avatars look better with this new tech underneath, the company also showed me the potential of the headset’s face-tracking when more resources are poured into fidelity. In the demo, my own facial expressions were driving a fantasy avatar, and the result was very impressive. The spectrum of expressions covered and the way the skin appeared to naturally bunch up around the nose, eyes, and forehead was very impressive.

Of course, even though it was my face driving the avatar’s expressions, it wasn’t me. The expressions looked plausibly real… but whether or not they look specific to you (even when using your own avatar), is something I haven’t been able to determine yet. That’ll have to wait until I can see someone I know very well on the other side of an avatar using Quest Pro.

All-in-all, Quest Pro is something of a canvas… and a pretty good one at that. It has the kind of capabilities that we’d ultimately like to see in a pair of all-day sunglasses 10 years from now. To that end, it’s no wonder that Meta has priced and positioned the headset more for professional users, as those are the most immediate and clear use-cases for these new capabilities.

For VR gamers there’s not much about their current VR experience that Quest Pro would change right out of the box, other than some apps gaining a better passthrough background. Not to mention that gamers can add Touch Pro controllers to Quest 2 without buying the entire headset.

Further out, it looks like Meta’s plan is to find out which technologies from Quest Pro should trickle down into a future Quest 3 at the same time as incubating new and interesting MR apps for the whole Quest ecosystem.