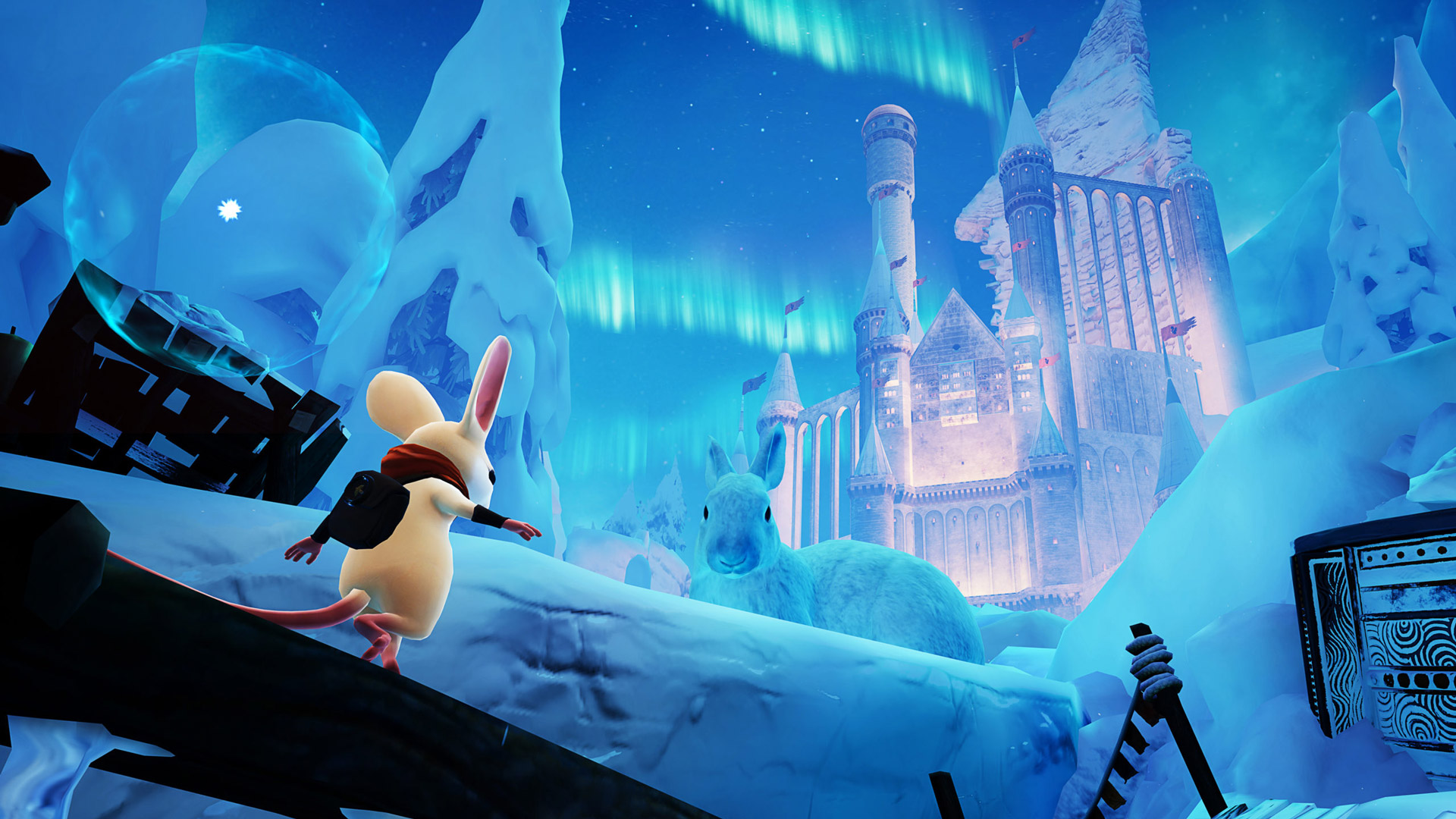 A whopping four years after its opening chapter, Moss: Book II is finally here to continue the story of Quill, a tiny adventurer destined for an epic journey. While the game doesn’t think too far outside the box compared to the original Moss, developer Polyarc has refined the best parts of the game to deliver a satisfying direct continuation of Quill’s story.

Moss: Book II builds on the same underlying gameplay formula that made the first a great game. The player controls Quill, an adorable and capable little adventurer, through platforming, light combat, and puzzling. The player plays seated using the PS4 DualShock 4 controller (PS5’s DualSense isn’t supported), and controls Quill with the thumbsticks and buttons, but also has some direct influence over the world thanks to a floating orb that represents the position of the player’s controller. Using the orb you can reach into the world to move specific puzzle objects, heal Quill, mind-control enemies, and more.

The story picks up immediately where the original Moss left off, so if you haven’t played it yet, you’ll certainly want to start there.

Moss: Book II is split up into small segments in which Quill usually crosses from left to right over the course of a few minutes. Polyarc has upped the visual ante, even against the already impressive scenes of the first game. Each segment is a beautifully detailed diorama with masterful attention to lighting and composition.

In fact, the scenes are so rich with detail that I actually wish the game provided more reason for players to look around the environment—if you stay purely focused on getting Quill from A-to-B, you’d be missing out on a significant part of the game’s charm. There are some hidden collectibles but they were generally too obvious to really encourage the player to breathe in each scene as a work of art. Astro Bot Rescue Mission (2018) had a simple mechanic where each level had a nearly-invisible creature hidden within it, which was effective at encouraging me to revisit levels and look in places I might not have thought to look on my first pass.

Moss: Book II continues to be light on enemy variety (which was already a critique from the original), but luckily it manages to spice up combat just enough thanks to the introduction of two new weapons (in addition to the original sword) and a special power to go along with all three of the weapons. To activate the special power, the player holds down the attack button to make Quill hold her weapon up, then the player must reach out and touch it with their controller to prime the power before Quill can use it.

Smartly, each weapon’s special power works as both an extra combat mechanic and a puzzle mechanic. For instance, players will get a ranged weapon which, when primed, can be thrown extra far and will stick into walls. Upon using the attack button again, the weapon will fly in a straight line back to Quill. Not only can you use this to hit multiple enemies in a row (both on the forward thrown and the return), but it is also essential to many of the game’s puzzles where the player is tasked with using the return to hit switches that would otherwise be impossible to reach.

Thanks to the new special powers of the weapons, and some new environmental interactions, the puzzles in Moss: Book II take a step up in depth over the original game. Like the first, I found puzzles hit that sweet spot where they occasionally felt challenging and rewarding to solve while steering mostly clear of frustration. There were a few head scratchers that almost had me thinking the game might have bugged, but reliably I would find the answer after retracing my steps and trying to look at the puzzle from new angles.

This was the case especially later in the game where several segments involving magical changing gravity will make you flex your spatial reasoning in new ways.

Moss: Book II started with a fairly slow pace for my taste; this is exacerbated a bit by how long it can take Quill to navigate around the environment even when it’s obvious where you need to go. But by the mid-way point, the game begins to hit its stride as you come to acquire new weapons and more is thrown your way in both platforming and combat. Granted, I don’t think I died once in combat, so the game might have benefited from adjustable difficulty options—like a cooldown on how often you can heal Quill.

Combat against the game’s basic enemies was satisfying but never felt terribly challenging, however the game puts your skills to the test with a small number of unique and well designed boss fights. One of those fights involves an enemy that’s much larger than Quill and features stunning animation that was a delight to see.

And animation isn’t the only place where Moss: Book II shines. Really the whole game is superbly polished both in visuals and sound. Quill herself is animated with such prowess that you really get a sense of her character from the way she moves. And while the music didn’t leave me with any particularly memorable themes, it played its role well in creating the right atmosphere throughout.

From a story standpoint, Moss: Book II has enough going on to carry the action along, but unfortunately the way the story is told hampers things a bit.

Sticking to the style established in the first game, the story is primarily told through sequences that take the player out of the game and places them in front of a book. As you turn the pages, the singular narrator reads the story points while you look at lovely illustrations of what’s happening.

However, several of the game’s key characters are only ever seen in the pages of the book—and they’re all acted out by the same narrator doing different voices—which I felt prevented them from taking on unique personas that were grounded in the world and central to the story.

Further, there was a key story point that wasn’t communicated clearly which robbed the game of the poignancy its ending otherwise could have had. Granted, I appreciated that the game opened up some new and interesting threads with regards to the relationship between the world of Moss and ‘The Reader’ (the name for the player-character), though it seems we’ll have to wait for another chapter still before we’ll see how that might play out.

All in all, Moss: Book II took me just about five hours to beat, including collecting some 80% of the game’s optional collectibles (all of which was from my first playthrough). While that’s definitely on the short side, I’m happy to report that the game has very little fat, and there’s enough momentum in gameplay and plot that the game feels longer than those five hours alone. It’s just enough to feel like a satisfying adventure, whereas the original Moss felt like it ended too soon.

Like the original, Moss: Book II creates excellent atmosphere with its many beautifully constructed environments. It’s a real shame the game lacks a ‘photo mode’ for taking high-quality photos of these lovely places (the default PSVR screenshots and captures produce extremely low resolution media that really undersells what the world looks like in the headset).

Each segment is its own diorama that’s coated in detail to look at up close, and if you back up and look further around you’ll realize that everything is taking place in a normal-scale world. Many of the game’s segments are set against a huge backdrop, like a massive tree, that gives beautiful context to Quill’s actual journey from one segment to the next.

In fact, you’ll occasionally see the relics of a human world in the backdrop—like a dilapidated human-sized building partly covering the mouse-size stage before you, or a long forgotten statue of a human. This environmental storytelling is highly intriguing, but unfortunately the game never directly acknowledges it, leaving any historical interplay between the human and rodent worlds a total mystery.

Through various mechanics like powering up Quill’s weapons or moving interactive pieces in certain segments, Moss: Book II seems to have the player generally reaching into the world for direct interactions more often than the original game, which helps make it feel a bit more real (save for PSVR’s occasionally wonky tracking).

Small details—like plants reacting to the touch of your orb—help sell the illusion further, and I appreciated that the game’s inventory system isn’t a mere selector but instead has players grab the item they want and then hand them to Quill.

One missed immersion opportunity returns from the original however: there’s never really any threat or interaction directed at The Reader (the player-character), and nobody in the world except for Quill interacts with you in a meaningful way. As I put it in our original Moss review, “I was able to reach into the world, but the world never really reached back at me in a way that truly mattered.” That’s a shame considering how central The Reader’s existence is to the story and game structure in general, and the effective ways in which Astro Bot Rescue Mission (2018) (to name one obvious example) showed how this could be achieved.

Another slight immersion breaker is that the game is very particular about where the player can navigate. Sometimes there will be a tiny fence that you frustratingly can’t jump over—even if it would be a shortcut to where you want to go—and other times there will be a tall ledge that doesn’t look like you could reach it, but actually you can—and it’s the only way to get where you need to go. That makes it feel a bit more like Quill inhabits a ‘course’ rather than a grounded world, and it can rob the player of some creativity in how they get around the environment or solve puzzles.

As a seated game that never artificially moves the camera, Moss: Book II is nearly perfectly comfortable. The only critique to the comfort comes not from the game, but from PSVR’s tracking which isn’t always on point. When your head is just a few feet from a static scene, positional jitter is pretty obvious. It never rose to the point of making me dizzy, but for anyone who considers themselves very sensitive to VR motion it might pose a problem for long sessions or especially tough tracking conditions (remember to play in the darkest environment you can and make sure you aren’t back-lit!).

The only other comfort comment I have about the game is that on occasion I had to reach a little further into the game world than was convenient, simply because Quill was far away from me. This might be annoying depending upon how laid-back your seating arrangement is.