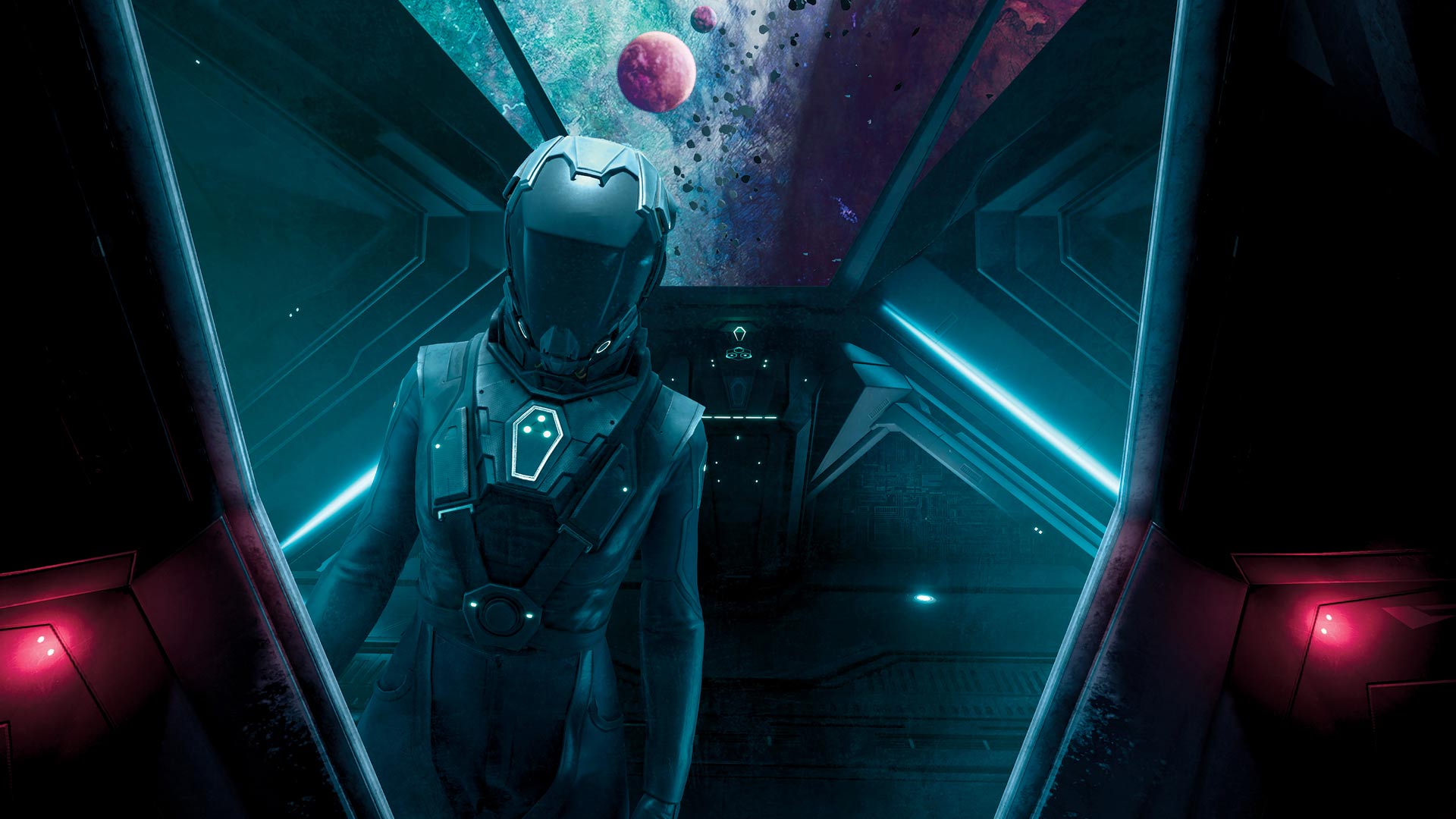 Hubris should be what we’ve all been waiting for, a visually well-realized VR native that transports you to otherworldly biomes, replete with shooting, jumping, climbing, swimming, and even some basic crafting mechanics. On paper it certainly checks many of the sci-fi shooting and adventuring blocks, but look past the flashy visuals and apparent feature set and you’re left with a fairly mediocre VR shooter that just isn’t clever enough out of the gate to be truly engaging.

You’re a recruit belonging to the Order of Objectivity—basically a space marine who happens to have crash-landed on a hostile world which is in the midst of being terraformed. Large terraforming towers loom in the distance above the rocky, desolate world. The only wildlife comprises of squids and a few giant bugs, and most of them aren’t friendly. You job is to kill everything, scrounge everything for weapon upgrades, and experience the majesty of probably one of the best-looking PC VR games currently available.

Exterminating the local fauna isn’t difficult—one shot and they splatter into goo. The same is almost always true for the corpo-baddies who repel from dropships to infest the inner bowels of the terraforming towers and fuel refineries. On medium difficulty, one or two well-placed shots can kill most dudes outright, save one rare tank type you meet in the final quarter of the game which may take two or three magazines from either the pistol or submachine gun.

For some reason these faceless goons don’t like the Order or its badass super soldier, Cyana, but then again, I can’t blame them. I’m a faceless goon too, albeit one with a gun and an inventory large enough to porter several junkheaps of metal scraps and other fiddly bits to a shredder which gives me the base unit of each found item: metal, fiber, plastic, and cyan: the game’s unobtainium.

Scrounging and crafting is a pretty satisfying experience, and the quick inventory system of reaching over your shoulder for either health or junk items works surprisingly well—right shoulder for health, left for junk. The flatscreen inventory, pulled up by tapping your wristwatch, is a little less effective in default mode since you can only grab one specific item at a time before it auto-closes and you have to reopen it again, but you can change that in the settings. Here’s a look at a juicer you’ll find at some point in the game which lets you craft health potions with fruit you collect:

Just plop in the required bit into any crafting machine, and you’ve got your potion, food, or gun overhaul at the ready.

The most important bit is undoubtedly how Hubris performs as a shooter, and it’s not great. Reloading and cycling through your three weapons (pistol, shotgun, submachine gun) is an intuitive and well thought out affair, although actually aiming and shooting the weapons is sadly lacking in refinement.

Both the pistol and submachine gun are very difficult to get a good sight picture, which forces you to shoot by intuition alone. You’ll typically need to correct your aim on the fly, which wouldn’t be so much of an issue if you had a few spare mags on hand. This ends up making you spray precious bullets when they might be better used with more accurate shots.

Granted, reloading is easy—just hold the empty weapon up to your head and wait the 10-15 seconds for the haptic buzz to stop. Ideally, this sort of intentionally slow reloading is supposed to force the user into a more tactical shooting stance since you can’t quickly reload, but at times this made me think too tactically. After all, if I can’t trust my own aim, I’m not going head-first into a firefight for fear of being set back to the last auto-save point in a jiff.

That 10-15 seconds in a firefight naturally forces you to make better use of cover, which is all well and good. But because there’s no incentive to rush into a firefight with less than each gun’s magazine can hold—variable on whether you have the pistol, shotgun, or machine gun—what tends to happen is this: you scoot back to a choke point and wait for the AI to stupidly file in one-by-one until a whole area is cleared of baddies. It’s efficient, but not very fun. If gun models were just a little more refined…

The array of enemies isn’t terrible once you get to the last quarter of the game, where things really pick up in difficulty and the diversity of all of the skills you learn finally come together. Still, the game’s AI is fairly dumb in how it moves about, but is strangely always accurate in its shots. Of the two types of soldiers, the one you’ll see 99 percent of the time is the standard idiot who vaporizes with one or two blasts.

There are some flying enemies too. There is one type of drone you’ll regularly come across, which requires about 10 bullets from the pistol or 24 from the submachine gun, and one type of magnetic mine that will follow you around until either you or it dies first.

All of them are bullet sponges with no discernible weak points, save the shielded mine which can either be disabled with a spare battery orb, or by shooting it from above or below. Maybe a headshot is enough to kill a soldier? I’m still not sure since aiming is basically constant guesswork. It’s shame, because if your GPU can chug at least as well as my aging Nvidia GTX 1080, the visual experience of the game is pretty impressive (more on that in Immersion).

There was some glitchiness, although we’ve been told by Cyborn that the final release version will fix some areas with notable framerate drops. In the six hours it took me to beat on medium difficulty I never experienced a game-breaking bug though, which is a big step up from what we saw in the demo that was available back in the summer.

On one hand, you have visually poppy scenes that draw you in, and a world that practically feels alive; that’s no small feat. I simply don’t want to understate how good Hubris looks. However, extreme polish in this one specific aspect of the game seems to highlight other parts that seem intent on detracting from the overall experience.

One of my least favorite gaming tropes is on full display in Hubris: the helpful robot who tells you everything you need to know and where to go. In short, you can forget figuring anything out for yourself for most of the game, as you’re effectively robbed of nearly every instance of discovery in Hubris until you get to, again, the last quarter of the game. You’re led by the hand to each objective, and everything (everything) is summarized ad infinitum by one of the most unintentionally condescending characters.

The dreaded helper-bot in question is actually supposed to be piloted by my flesh and blood commander, Lucia, who delivers lines more akin to a kindergarten teacher gently chiding me into cleaning up my blocks before laying down for a nap than, say, a battle-hardened space marine. Across the board, voice acting doesn’t feel well-directed, resulting in it actively hurting the seriousness the game works to build. If there were only some explanation for her weirdly mismatched tone, like an emotion chip gone awry or maybe I’m just a dumb toddler grown in a vat who needs constant reassurance. Nope. It’s just a weird thing about Hubris I guess.

The narrative isn’t much more than your standard sci-fi fare, which is absolutely fine, but I can’t help but think how much better Hubris would be (middling gunplay included!) if I just had a second to look around and breathe in the atmosphere without constantly being annoyed to death.

Hubris includes a number of locomotion situations beyond your standard single-plane shooter. It requires you to jump (using the ‘A’ button), climb, swim by moving both arms, run around and strafe, and drive around in a vehicle at some point too.

Most of this is done in such a way that it’s comfortable to the user, although there are a few standout scenes when I personally didn’t want to have eyes in my head, notably when dropships fly overhead and the camera shakes so much it gave me the wobbles. Getting in the way of another character during their scripted movement will also move you without your consent, which can be jarring the first time it happens.

As you’d imagine, you’ll need full range of motion for both arms to climb and swim, so make sure to either have an adequate chair to sit in or stand up for the entirety of the game.