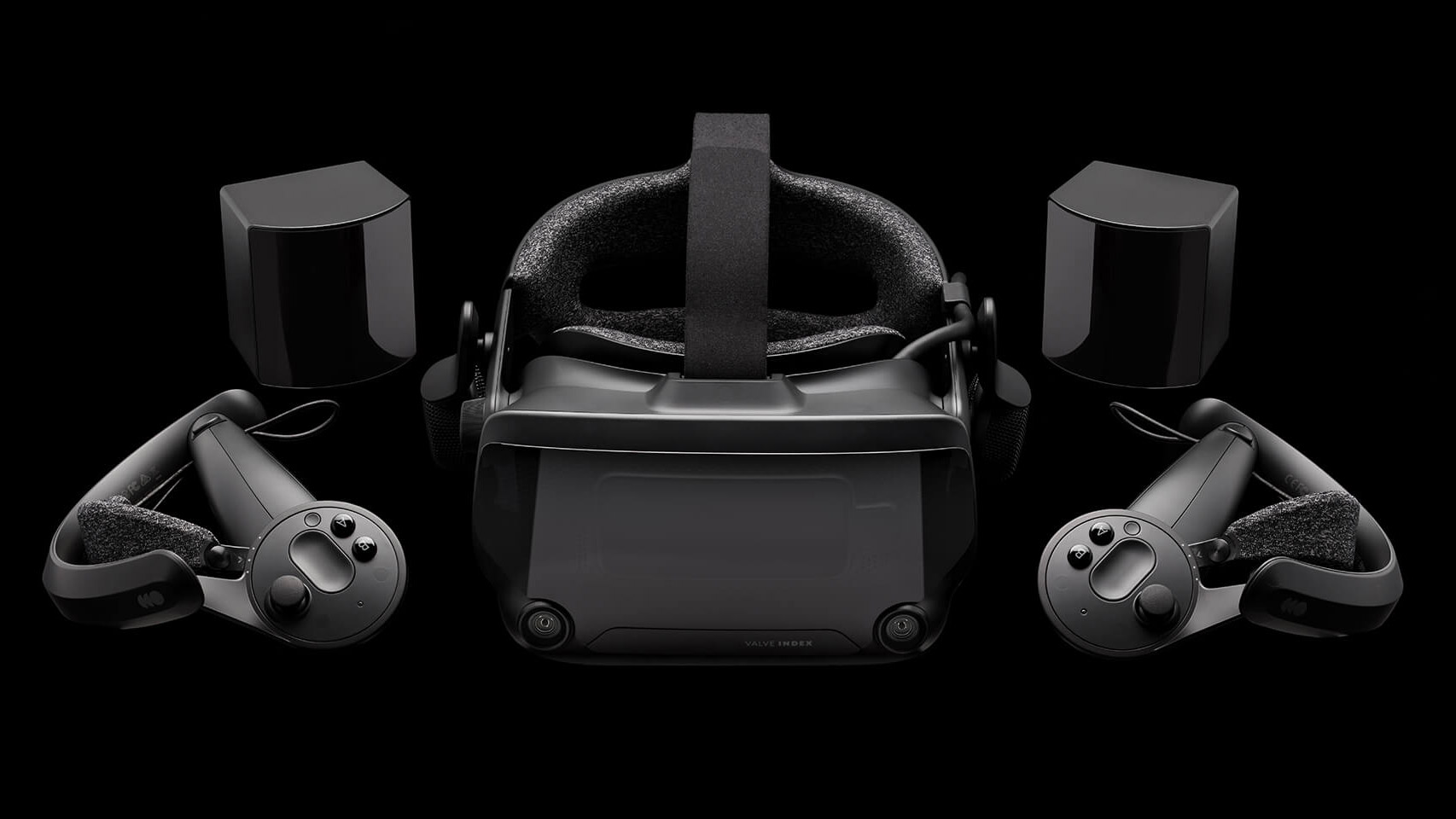 A smaller number of people willing to buy an expensive product can really add up, as Valve has found with its high-end Index headset. At the third anniversary of the headset’s release—despite its age and never-discounted $1,000 price tag—the headset has continued to rank among the 10 highest grossing products on Steam.

Valve has been pretty quiet about VR in the last year, but its first and only VR headset, Valve Index, has shown impressive longevity. The now three year old headset continues to been seen with regularity among the 10 highest grossing products on Steam, with only a slow decline in the long run. 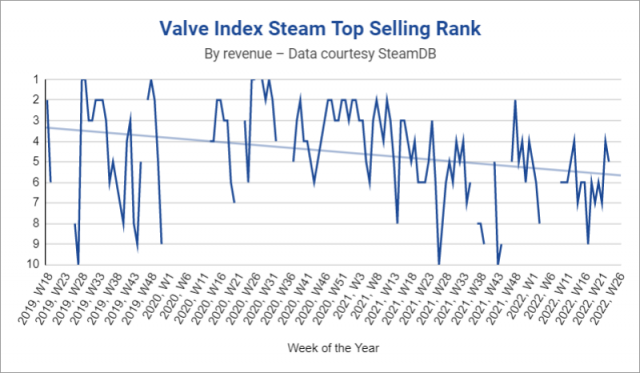 That’s despite the $1,000 price for the Index ‘full kit’, and significantly cheaper options like HP’s Reverb G2 and Quest 2 which have immerged after Index was released. 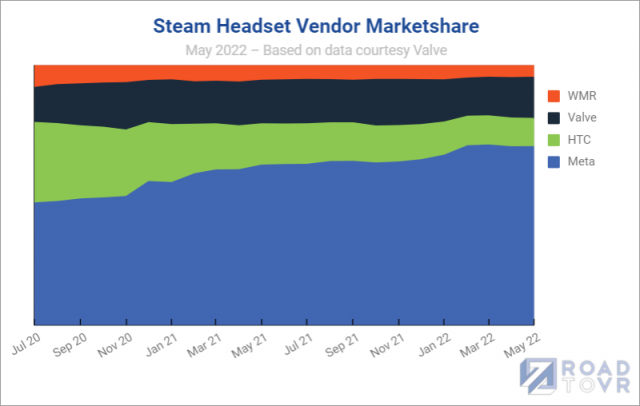 Other headset makers haven’t been as resilient to the onset of Quest 2. HTC, for instance, has seen its share of headsets drop from around 28% to just 11% over the last two years.

Despite continued demand for Index, questions remain about Valve’s commitment to VR. The company’s VR efforts have significantly slowed, at least from the outside. However there’s hints and rumors that Valve is working on a next-gen VR headset.

The prior update, which tracked Index’s demand at its second anniversary, continues below.

Back in January Valve head Gabe Newell said that the company was “very much manufacturing constrained,” regarding its ability to meet the demand for the Valve Index headset. Even so the headset has managed to earn enough revenue to place it among the 10 highest grossing products on Steam for 50 weeks running, nearly an entire year. 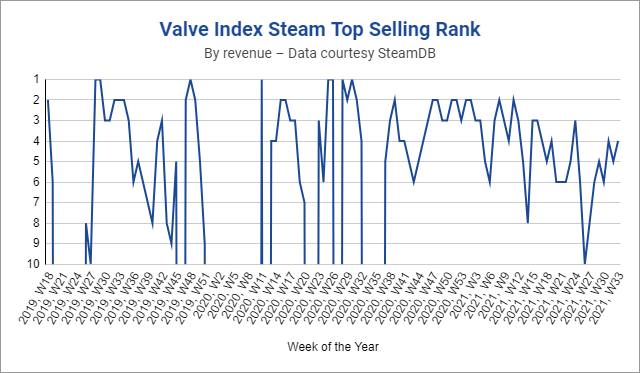 That tracks with the headset’s clear success versus other headsets on Steam. Despite an exceptionally steep $1,000 price that has remained static since launch—and newer and more affordable alternatives—it has grown to become the third most used headset on Steam; second only to the much less expensive Oculus Rift S and Quest 2. 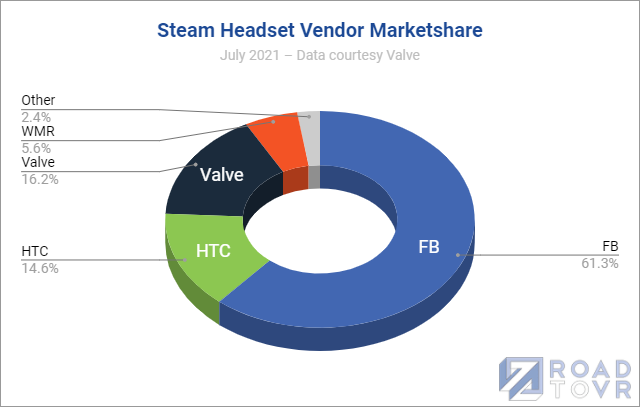 The original article, which discusses the caveats and takeaways of Index ranking among the best selling products on Steam, continues below.

Original Article (January 26, 2021): From a unit standpoint, it’s unlikely that the $1,000 Valve Index is selling all that many headsets compared to cheaper headsets like Oculus Quest. But from a revenue standpoint, the headset seems to be treating Valve very well.

Although Valve doesn’t share how much revenue individual products make on its platform, Steam does rank the top selling products, by revenue, each week. SteamDB maintains an archive of the weekly top 10.

With Valve Index supply ramping back up after supply disruptions, we can see that the $1,000 headset has been among the top five best selling products for 13 weeks running. 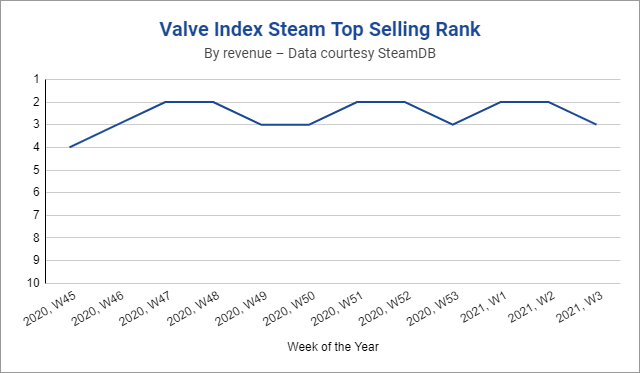 It’s worth remembering that the ranking is by revenue; to put things into perspective, each Index kit sold costs the same as about 17 games at $60 each. Still, it seems quite impressive that the headset’s revenue is ranking alongside some of the world’s best selling games. On certain weeks over its 13 week streak, Index has surpassed the weekly revenue of major games like Cyberpunk 2077, Red Dead Redemption 2, and others. 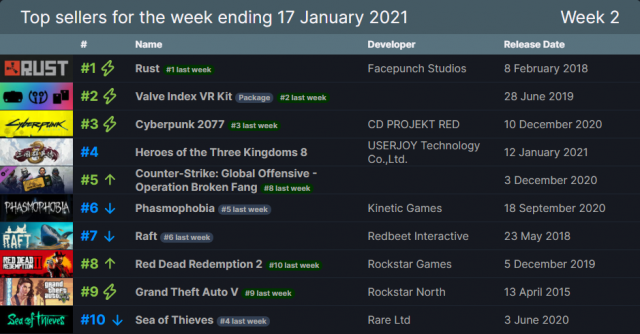 Looking at the historical data, we can see how often the headset has permeated the top 10 best selling Steam products of each week, including eight separate weeks where it’s topped the charts at #1. 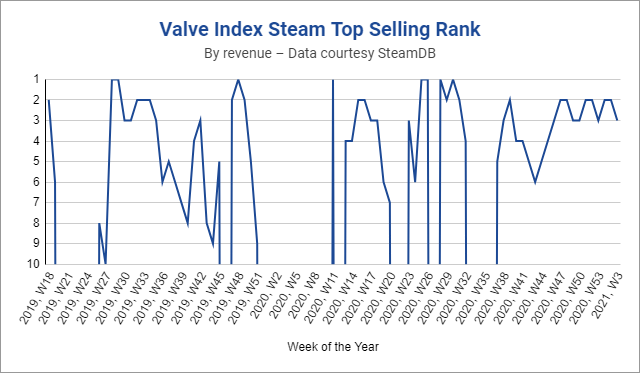 Given how infrequently Valve’s own Half-Life: Alyx has appeared in the top 10, we’d wager that the headset has earned the company far more revenue. Granted, profit is a different story; Valve isn’t believed to be making much profit from each Index sold, but still, a large revenue stream generated by the headset is overall a good thing for the company, as long as it’s breaking even or better.

While the headset’s placement among the top 10 best selling Steam products is certainly affected by the seasonal nature of major game releases, the long term look at the ranking likely also signals how the headset’s availability has fluctuated since release. We can see large gaps in the headset’s top 10 appearance for 6 weeks right after its release in mid-2019, as well as a 12 week gap at the start of 2020, and a 4 week gap in mid-2020.

In a recent interview with New Zealand’s 1 News, Valve head Gabe Newell explained how the Coronavirus pandemic hampered the company’s ability to meet the demand for the headset.

“We actually have components that are manufactured in Wuhan [where the outbreak began] and when you’re setting up your manufacturing lines it doesn’t occur to you that you’re suddenly going to be dependent on this peculiar transistor that’s sitting on one board that you can’t get,” Newell said.

“[Everyone who builds electronics] ended up running into the same problem simultaneously—you go from, ‘Oh, we’re in great shape,’ to, ‘What do you mean Apple or Microsoft just bought the next two years’ supply of this just so they could make sure they aren’t going to run out?’”

“You went from a situation where everything was getting done just in time to people buying up all the available supplies.

While the company indeed struggled to keep up with demand in 2020, supply appears to be picking up rapidly as 2021 gets underway.