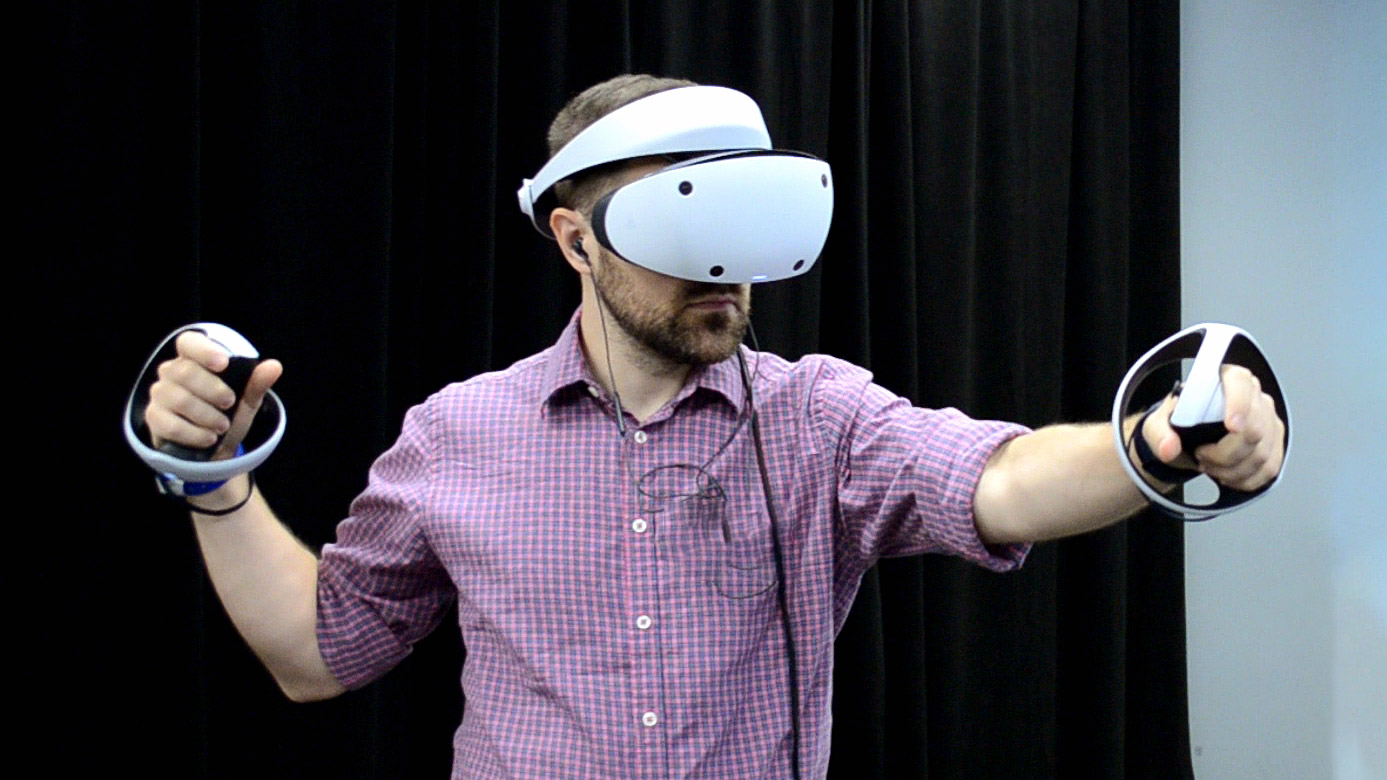 Sony’s long awaited PSVR 2 isn’t here just yet but after an extensive hands-on with the headset it’s clear it’ll be worth the wait.

Last week I visited Sony’s PlayStation headquarters in San Mateo, CA to see PlayStation VR 2 in person for the first time. Though we’ve known the full on-paper PSVR 2 specs for quite some time now, there’s still a lot about using a headset that isn’t easily quantified from numbers alone. But after a few hours in the headset across a variety of different experiences, I’ve got a pretty good sense of what the full package really feels like.

Keep in mind, of course, I was using a prototype version of PlayStation VR 2 which still isn’t due to launch until early 2023, so some things may change between now and then. I got to play four demos on the headset: Horizon Call of the Mountain, Resident Evil Village, The Walking Dead: Saints & Sinners – Chapter 2, and Star Wars: Tales From the Galaxy’s Edge – Enhanced Edition. I’ll have more detail on my time with some of these demos specifically, but first, this is my experience with the headset overall.

From a form-factor standpoint, PSVR 2 is very similar to the original headset, right down to how you can stretch the rear headstrap to don the headset and then turn the crank to tighten it to taste. But through the lenses there’s much that’s changed.

A Feature Every VR Headset Should Have

For one, PSVR 2 now supports eye-tracking and IPD adjustment. And I’m happy to report that Sony has created a straightforward in-headset calibration which will help users dial into the ideal IPD and even make sure the headset is seated on their head correctly.

When you run the PSVR 2 calibration you’ll see a cartoon head in front of you with holes cut out of the eyes. Inside the holes are blue circles that represent your actual eyes. Your goal is to adjust the headset (both the way it rests on your head and by turning the IPD dial) such that the blue circles are in the center of the holes. Once you get close enough, the holes light up green to tell you everything is good to go.

This is a large quality-of-life improvement not just over the original PSVR, but over most VR headsets on the market. While many headsets have a manual IPD adjustment, few people actually know their specific IPD measured in millimeters—nor do they know to look for uneven chromatic aberration as a sign of misalignment—leaving most to just ‘wing it’ and try to align the lenses to their eyes by look and feel. With PSVR 2 you don’t need to know your IPD because the calibration step will automatically guide you to the ideal lens-to-eye alignment—ultimately helping more people achieve the clearest image they’ll be able to get from the headset. This is a feature every VR headset should have.

Another nice quality-of-life improvement on PSVR 2 is passthrough video, which allows you to use the headset’s cameras to not just look out to the real-world, but also to easily define your playspace boundary. The passthrough video view is noticeably higher resolution on PSVR 2 than Quest 2, though it’s still black-and-white and far from maxing out the headset’s display resolution.

PSVR 2’s playspace setup process is very similar to what you see on Quest 2: you’re able to draw an outline from within your headset to set your boundary. Additionally the headset ‘scans’ the space around you to make an initial suggestion for your playspace, which you can then expand or refine as you see fit.

So once you’ve got the headset calibrated and your playspace defined, how does it actually look? Well for one, it’s a heck of a lot clearer than the original PSVR thanks to the jump in resolution from 960 x 1,080 (1.0MP) per-eye to 2,000 x 2,040 (4.1MP). The screen-door effect is functionally invisible, though a noticeable amount of mura (brightness & color inconsistency from one pixel to the next) holds back clarity to some extent.

Mura is often worse on OLED displays (such as the one in PSVR 2) than LCD, but for that downside you get the benefit of much better contrast which brings rich darks and deep colors. In vibrant games, like Horizon Call of the Mountain, the world really pops.

While Sony says PSVR 2 has an ‘HDR display’ (a fairly ill-defined term), they haven’t specified the max brightness of the headset. In my time with it there weren’t many moments where I felt like HDR was making an obvious difference; this level of ‘HDR’ may just feel a bit more like expanded contrast compared to high-end HDR-capable TVs and phones where the effect is plainly visible.

Though generally quite sharp, I did notice what appeared to be a good bit of persistence blur on PSVR 2 which causes the world to get somewhat blurry when rotating your head. This struck me as perhaps an issue with the display’s low-persistence function (which most VR headsets employ to combat this issue). Assuming I’m right about this being a persistence issue (and I could well be mistaken), it isn’t clear to me if low-persistence isn’t enabled at all, not yet fully tuned, or maybe it’s already optimized but this is just a fundamental limitation of the display. Sony declined to comment on the matter for now.

Also on the clarity front… I’m tentatively impressed with the Fresnel lenses on PSVR 2. Most headsets with Fresnel lenses suffer from quite noticeable glare and god rays, but they seemed quite subdued (though not entirely invisible) on PSVR 2 compared to contemporary headsets. As I was being hurried through various demos, I didn’t get to find the ideal test scene to reveal god rays, but as I said, I’m impressed with the levels I saw during nominal gameplay. Fingers crossed that Sony cooked up some special lenses that really are making a difference.

And another nice thing about the lenses on PSVR 2: the field-of-view feels noticeably larger than the original PSVR (Sony claims 110° compared to the original 100°). It’s a nice little boost though it’s not going to make or break your experience.

A New Dimension of VR Haptics

And you might forget about another new feature until you feel it… PSVR 2 is (likely to be) the first on the market to come equipped with head-haptics. That gives developers the option to give your head a little rumble to communicate in-game effects. It works well to give you an even more intimate sensation than controllers rumbling in your hands. It seems like PlayStation VR 2’s head-haptics will be a perfect stand-in for the moments where ‘screen shake’ would typically be employed in non-VR games (ie: big explosions or really important things happening to your character directly).

PSVR 2 is finally moving to industry-standard motion controllers which is going to be a blessing for developers and users alike. With a thumbstick, buttons, grab button, and trigger on each controller, VR games will no longer need to make abstract control schemes that are specific to PSVR. And developers can count on every PSVR 2 user having a pair of controllers (which was not the case with the first headset’s PS Move controllers).

Those of you reading carefully above will note that I said “grab button,” instead of “grab trigger.” Indeed, the grab button on PSVR 2 is a binary button rather than an analog trigger. My preference is definitely the latter, as I find grab triggers are a bit easier to keep depressed for holding virtual objects. I didn’t have any major issues with the grab buttons on the PlayStation VR 2 controllers so far, but it might be a little annoying for games where players are expected to hold the same object for long periods of time.

The controllers also include the same reactive triggers found on the PS5 controller, as well as rumble haptics in the handles of the controllers.

For both the reactive triggers and the handle haptics, I didn’t get the sense that either of them were particularly well implemented by the demos I saw (I just didn’t notice either very much). My best guess is that this isn’t an issue with the haptics but simply the developers needing more time to come to grips with the specifics of the haptics in the controllers; developers often need to tune haptics from one VR controller to the next because each has different capabilities, haptic engines, and even haptic positioning—all of which contribute to different feelings even for the same exact game. I expect this will improve as the headset gets nearer to launch, especially knowing the impressive capabilities of the PS5 controller which appear to be largely mirrored in the PSVR 2 controllers.

Tracking on PSVR 2 is also a huge upgrade over the original PSVR. The new headset has 6DOF inside-out tracking which means the user can turn and walk essentially anywhere (within range of the cord), compared to the small tracking space afforded by the original headset.

In practice tracking seemed very good on PSVR 2, both the head-tracking and the controller tracking. I didn’t notice any overt drift, jitter, or latency during my time with PlayStation VR 2 (which was a real problem with the original PSVR).

Of course, inside-out tracking can be highly dependent on the environment around the player, so we’ll need to wait to see how well the headset handles a wide range of environments and varying lighting conditions. In any case, it looks like it’ll be a big step up in tracking performance over the first PSVR headset.

And while we’re at it, let’s talk about eye-tracking on PSVR 2, which also includes support for foveated rendering. It wasn’t clear to me if all of the demos I saw were using foveated rendering, but I only barely noticed it when playing the VR version of Resident Evil Village. It’s fast and subtle enough that I think most people simply won’t be able to tell that foveated rendering is happening at all—though this may depend substantially on how accurate the headset’s eye-tracking calibration is. I was the only one using the headset in the course of my demos, but if I had handed it to another person they would need to run their own eye-tracking calibration (which takes maybe 20 seconds) for the best results.

All-in-all, I’m quite impressed with what I’ve seen from PSVR 2, both from a features and performance standpoint. There’s a few tweaks I’d love to see before it hits market, but there’s little doubt in my mind that PSVR 2—combined with the power of PS5—is a genuine generational step forward for virtual reality on PlayStation, while offering up a few lessons for the rest of the VR headset market. The only big question still unanswered is what Sony will charge for PlayStation VR 2.

Got more questions about PSVR 2? Drop a line in the comments below.

Disclosure: Sony assisted with travel & lodging expenses to an event where information for this article was gathered.