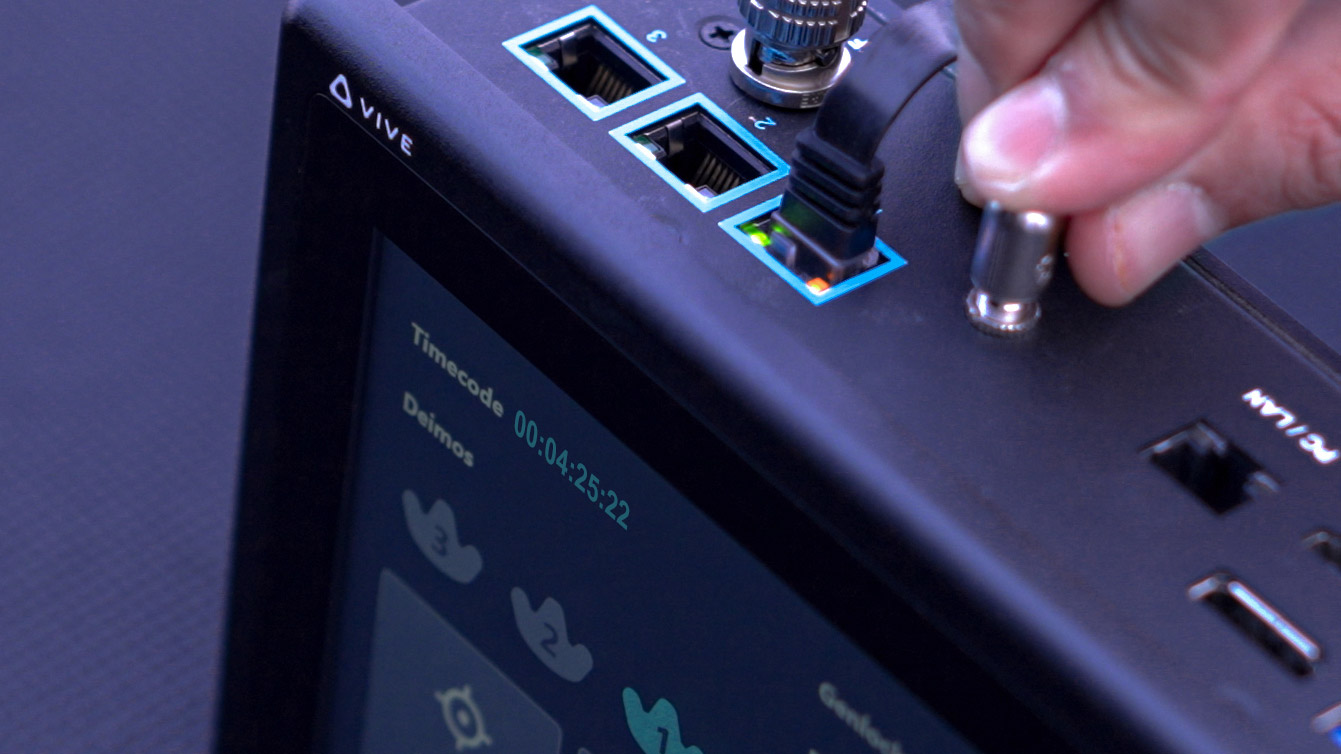 HTC shared a curious tease that reveals a new Vive product which appears to be part of a system leveraging the company’s Vive Trackers for virtual productions.

HTC’s Vive brand has been exclusively focused on XR technologies, but late last week the company teased a new Vive product that is likely more tangential to the XR space than part of it.

The new product was shown pictured essentially in full, which gives us some strong hints about what it will do.

The small box clearly has a display which shows that it can detect three Vive Trackers and four SteamVR Tracking base stations. And while the DisplayPort, HDMI, and three USB ports might suggest this is a compact PC that can handle its own VR rendering, other hints point toward a less powerful, purpose-built control device for detecting, capturing, and relaying the position of the trackers.

Why might you want such a thing? Virtual production—using mixed reality-like technologies for shooting film productions—is the obvious answer. This is bolstered by the ‘Timecode’ and ‘Genlock’ readouts on the box’s display, which are commonly used to keep film and audio equipment in perfect sync.

Positional tracking is hugely important in virtual production, especially for tracking cameras, whether you’re shooting entirely against a green-screen or an LED wall.

In the first case, precisely capturing the movement of the camera makes like much easier in post-production when CGI comes into play. Instead of manually aligning the real shot against CGI elements, the virtual camera can be easily aligned to the real camera to keep everything in sync.

Beyond camera tracking, accurate position tracking in production can be used to track props, actors, and more, which makes them more easily replaced or altered in post-production.

Of course, there’s plenty of positional tracking technologies that have been used in the film space for decades at this point… so why would HTC be getting into the game?

Well, compared to most of what’s out there, Valve’s SteamVR Tracking system is affordable, easy to set up, fairly precise, and dang cheap. And HTC is the leading provider of SteamVR trackers, small tracking pucks which are compatible with the system.

For around a thousand dollars—excluding the price of HTC’s new… let’s call it ‘Vive Tracker box’—you can have a reasonably sized tracking volume with four SteamVR Tracking base stations to precisely track three trackers (though hopefully the box will support more than just three, which would make the system easily extensible).

Compare that to something more commonly seen in the virtual production space, like OptiTrack, which can do more but starts closer to $10,000 and can easily exceed $100,000 if you want to increase the size of the volume.

Back to HTC’s new Vive product; it’s already possible to use SteamVR Tracking for virtual production use-cases, but it isn’t exactly a straightforward process. Not only do you need a dedicated PC with uncommon (in the film space) software installed (SteamVR), but you also need a USB dongle for each Vive Tracker that you plan to use.

The HTC Vive Tracker box is probably designed to be a turnkey solution that’s ready to go without any software installation or extra dongles, plus the ability to sync the positional tracking data timing precisely with other production equipment on set.

The end goal here is not just for HTC to make money by selling the box, but also by selling more of its Vive Trackers. The company’s tracking pucks are popular among hardcore VR enthusiasts who want to do full-body tracking, but that’s a highly niche audience. General purpose tracking, for virtual production or otherwise, is a much larger potential market for HTC to tap, even if it does mean veturing a bit outside of what has been the usual wheelhouse of the Vive brand.

And while Vive tracker box probably doesn’t mean too much for the XR industry itself, it may tell us more about how HTC’s XR arm—Vive—is faring right now.

SEE ALSO
HTC’s Vision of the Metaverse is Heavy on Buzzwords, Light on Substance

With its last four major VR headset releases seemingly not generating much traction for the company in the consumer VR space where it once dominated, Vive is veering into new territories in search of business. Beyond the Vive Tracker box here, another recent example is Vive Arts, the company’s effort to stake a claim in the NFT art scene.

So far HTC has not officially announced the Vive Tracker box beyond the teaser photo—so we still don’t have details like when it will launch, how it will be priced, or what specific features it will have—though we expect those details to come soon.