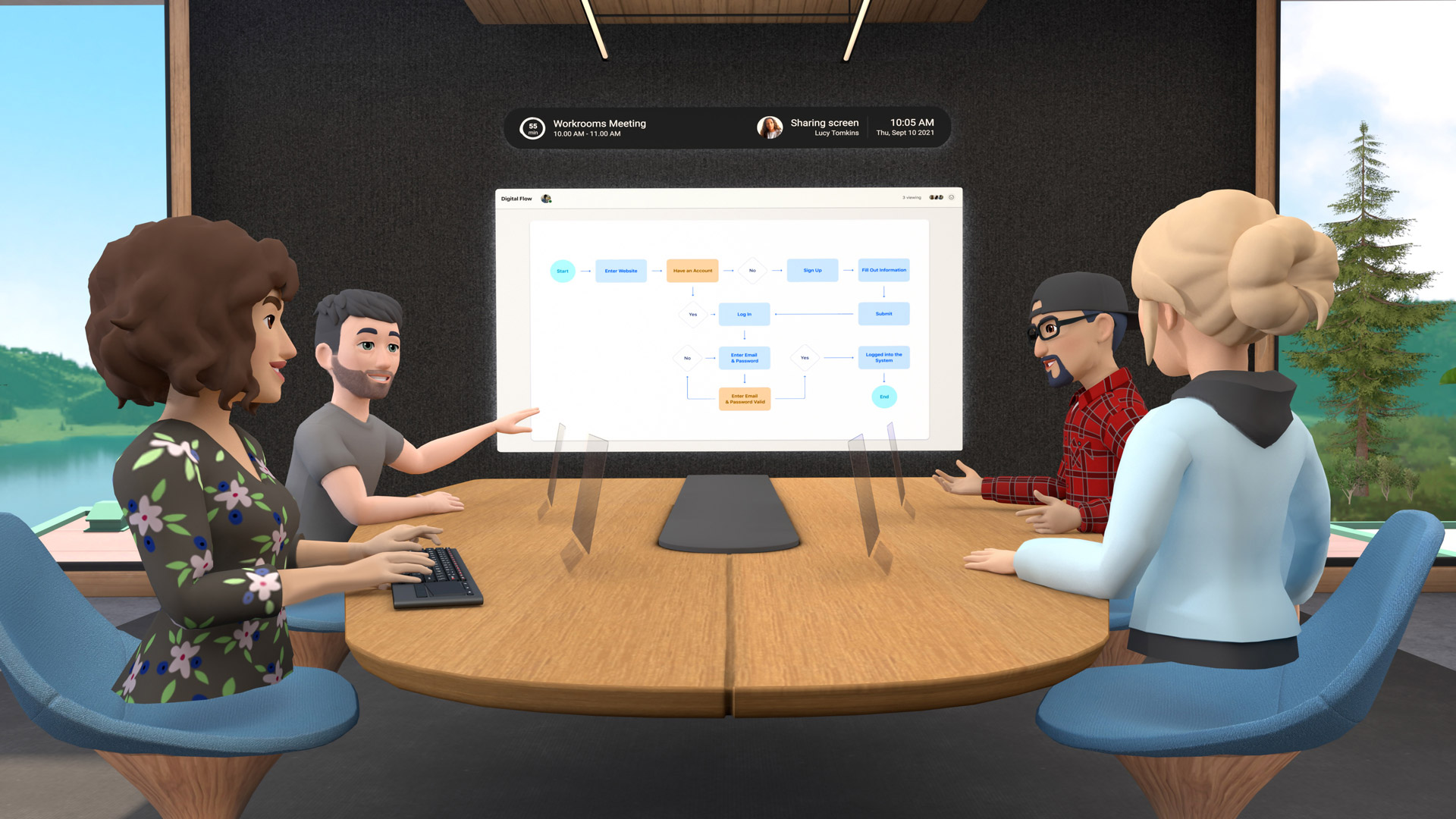 Facebook today is surprise-launching a new app called Horizon Workrooms, a virtual collaboration space that connects both VR and video chat users. With the ability to bring a user’s PC or Mac desktop into the virtual room, the app takes a big step toward turning Quest 2 into a collaborative productivity device.

While the long-awaited Facebook Hozion social app has yet to launch, the company has been quietly working on another ‘Horizon’ product which is launching today for free. Horizon Workrooms is an app built for remote collaboration and team productivity.

I got to tour the app earlier this week where I sat down with Facebook’s VP of XR, Andrew “Boz” Bosworth, and two of the leads on the project, alongside a handful of other journalists.

At its core, Horizon Workrooms is built around your desk. Like, your actual desk.

Before using the app, you’ll be asked to mark the surface of your desk so that Quest 2 can track it and show a virtual representation of it inside the headset. This is important because it’s the anchor for pretty much everything you can do inside of Horizon Workrooms.

The app includes a fully functional virtual desktop, which leverages a companion app installed on your PC or Mac to stream your computer’s desktop to a virtual screen in front of you. This means you can continue to access your computer even while you’re inside the headset, and you can even share your screen with others in the room.

To make it easier to use your real keyboard that’s on the desk in front of you, Horizon Workrooms supports keyboard tracking which allows it to detect a handful of specific keyboards, and create a virtual representation of them so that you can see and type on without being ‘blinded’ by the headset.

Right now Horizon Workrooms only supports Macbook keyboards, the Apple Magic keyboard, and the Logitech K830, though the company says they’re working to support more in the future.

If you don’t happen to have one of these keyboards luckily there’s a backup option. You can enable a ‘desk passthrough’ view which cuts out a portion of the virtual desk in front of you to show your actual hands on your actual keyboard. I was surprised how well it worked. While the passthrough video quality isn’t good enough to easily make out the letters on individual keys, for proficient typists it at least makes it easy to keep your hands properly aligned and prevents blindly reaching around for your keyboard. Now if only they could support coffee mug tracking too….

While it’s nice to have your usual desktop right in front of you—and all of the productivity capabilities that confers—it’s far from a perfect replacement for your actual PC. Latency between the PC and headset is surprisingly high, making mouse movements and keyboard input much more sluggish than you’re used to (especially if you have a high refresh rate monitor). Hopefully this is something they can improve going forward.

Horizon Workrooms isn’t exclusive to VR. Non-VR users can be invited to join via a video chat. The app supports up to 16 VR users and 36 video chat users simultaneously, for a total of up to 50 people in one workroom.

The room has a handful of different arrangements focused on different types of meetings. There’s a boardroom-style table with two distinct sides, a circular table, and a presentation layout where everyone is facing in the same direction like a classroom. As more users join the space, the table size automatically increases to accommodate.

While users sit at the table by default, anyone can stand up (like, literally stand up out of your chair), and be transported to the wall of the room next to a large virtual whiteboard. This is especially useful for the classroom-like presentation arrangement, as it gives everyone a clear view of the presenter and anything they write on the whiteboard.

Speaking of writing… Facebook has done something interesting with the whiteboard input. Instead of holding a Quest controller the usual way, the app actually expects you to flip it backwards and hold the handle like a fat marker. When you do this the controller actually turns into a marker in your hand, and then you can use it to write on the whiteboard.

It’s a neat idea but feels a little funky in practice, perhaps because of how snub the end of the controller handle is compared to what you’d expect from a writing implement. It seems that some changes to the positioning of the marker in your hand (making it stick out a bit further toward the whiteboard) could make it feel more natural.

Facebook says that each workroom gets its own whiteboard and that anything written on the whiteboard is persistent, meaning you can leave your ideas and come back to them another time. You can also export the whiteboard as an image for use elsewhere.

Horizon Workrooms also has a web-based interface built around a ‘team’ metaphor. It’s a place where room administrators can invite users to the team, allowing everyone to text chat, create notes, schedule meetings, and make new virtual workrooms. It’s also possible to upload files to the web interface which can be pulled into the VR meetings (for instance, bringing a photo from your PC to annotate on the whiteboard).