With more VR headsets on that market than ever and even more upcoming, 2021 has been a huge year for VR, and an excellent time for first-timers to jump in. In this article we’ve pulled together a concise look at the best VR headsets currently available.

We’ve refreshed our list with the latest info. Here’s a quick summary of changes:

PC VR is where you’ll find the highest quality visuals and the most ambitious VR games like Half-Life: Alyx. Of course, you’ll need a reasonably powerful gaming PC to plug your headset into. See this article for the specs your PC needs to handle VR headsets.

If you’re looking for the very best overall PC VR headset, Valve Index is our pick. It’s pricey compared to the rest, but has an excellent balance of quality, performance, and comfort. That’s why we called it “the enthusiast’s choice” in our full review of the headset.

Things to love about Index are its excellent tracking performance, wide field of view, quality controllers, great audio, and range of ergonomic adjustments that make it easy to dial in a comfortable and clear fit.

Index is one of the only headsets that offers an eye-relief adjustment. This let’s you bring the lenses as close to your eyes as comfortable, allowing you to maximize your field of view; it also makes the headset easier to adjust for glasses. Index has a physical IPD adjustment which ranges from 58mm to 70mm, making it easy to align the lenses with the width of your eyes for the sharpest visuals.

But Index isn’t perfect. Compared to other headsets on the market, the external tracking system is more work to set up, typically requiring two tracking beacons mounted on opposite corners of a room, stuck on a tripod, placed up high on a shelf, or screwed into your wall. They also need to be plugged into their own power outlets. And while Index has cameras on the front for a pass-through view, it isn’t as quick or useful as we’ve seen on other headsets. And did we mention the price tag of $1,000? You can get it cheaper though if you already have SteamVR Tracking base stations from an old Vive headset.

Valve Index is officially compatible with the SteamVR library where the vast majority of VR content is available. If you’re looking to play content that’s exclusive to the Oculus PC library (like Lon Echo II) you can use the free but unofficial Revive mod to play Oculus PC content on Valve Index. It may take some tweaking for performance and controller inputs, but for the most part Oculus content will play reasonably well on Index. 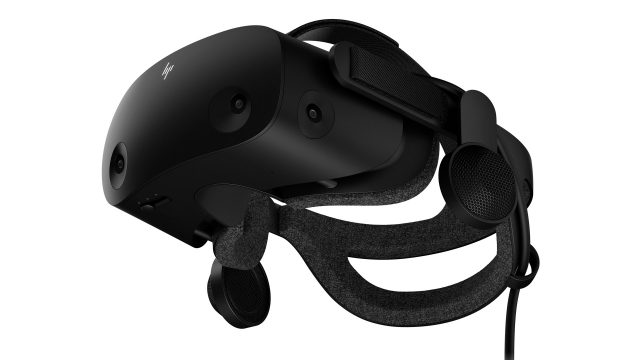 While Valve’s Index has great all-around performance, HP’s new Reverb G2 is the headset you want if resolution is your most important consideration. Reverb G2 should be on your radar especially if you’re thinking of picking up a VR headset for seated PC VR games like driving and flight simulators—find out why in our full review.

When it comes right down to it, G2’s defining feature is its class-leading resolution of 2,160 × 2,160, which can look downright amazing with the right content. Thanks to a collaboration between Valve and HP, G2 also borrows the excellent headphones of Valve’s Index headset and brings improved controllers compared to previous WMR headsets. Not to mention the headset has inside-out tracking which makes it easier to use thanks to no external trackers. And who can argue with it being nearly half the price of the full Valve Index kit?

Although it boasts improved controller ergonomics compared to prior WMR headsets, Reverb G2’s controller tracking still has more latency and less reliability than its peers, along with less detailed (and somewhat noisy) haptics. The controllers will get you through most games just fine, but if you plan to primarily play competitive or fast-paced games, the controllers on other headsets tend to deliver better results. As for field of view, G2 is similar to most of its peers but loses out compared to Index. The pass-through view also isn’t as useful as some other headsets because of its odd ‘flashlight’ implementation.

HP Reverb G2 works natively with the Windows Mixed Reality store, but very few VR applications are available there. Fortunately a free and official plugin from Microsoft also makes it compatible with SteamVR content. If you’re looking to play content that’s exclusive to the Oculus PC library (like Lone Echo II) you can use the free but unofficial Revive mod to play Oculus PC content on Reverb G2.

Although Quest 2 is a standalone headset (which means games run directly in the headset without plugging into a PC) it also has a feature called Oculus Link which gives you the option to run PC VR games by plugging into a PC. And if you have a modern router (Wi-Fi 5 or Wi-Fi 6), you can even do this wirelessly with the recently introduced Air Link feature.

Along with the useful passthrough feature, high resolution display, and great controllers, Quest 2 is a pretty great all-around headset. The hard-to-beat price makes it a great value, especially considering the fact that the headset also runs standalone VR games from the Meta Quest store. Meta has also consistently released software updates to improve the headset’s performance and features.

Unfortunately the cable that comes with Quest 2 isn’t long enough to work well for Oculus Link, and we can’t recommend the official cable because of its crazy $80 price tag. Thankfully you can get 26 feet worth of Oculus Link cable for $34. Or if you have a Wi-Fi 5 or Wi-Fi 6 router you can use Air Link to play PC VR games wirelessly.

And, as we found in our full review, we weren’t big fans of Quest 2’s soft headstrap, so we’d recommend dropping the extra $50 for the Elite Strap accessory [Amazon] if you’re serious about playing PC VR games. The built in audio is convenient, but we wish it was higher quality. It’s also worth noting that you need a Facebook account to use the headset.

Some users have reported strap failure on official Meta products, so it may also be worth looking into the cheaper third-party solutions. You’ll be sacrificing the built-in battery, but a cursory look at options on Amazon show a number of headstrap/battery solutions you may try to save a few bucks.

Without being plugged into a computer, Quest 2 can only play games from the Meta Quest library. If you plug into a computer via Oculus Link, you’ll have access to everything in the Oculus PC and SteamVR libraries as well. That means that Quest 2 is compatible with the vast majority of top VR content out there, as long as you’ve got a powerful PC to plug the headset into.

The Best Standalone VR Headsets in 2021

Standalone VR headsets are fully self-contained and don’t need to plug into anything. They generally offer high ease-of-use thanks to their all-in-one nature and lack of tether. With their low overall cost (thanks to not needing a high-end PC) standalone headsets are a great way to take your first step into VR.

Quest 2 is an upgrade over its predecessor in almost every way, though it’s worth noting that you need a Facebook account to use the headset.

With an impressive resolution, powerful Snapdragon XR2 processor, useful ‘passthrough’ view feature, and great controllers, there’s a lot to like about Quest 2. What’s more, if you ever decide to upgrade to PC-powered VR, Quest 2 can plug into your computer and be used like a PC VR headset. When it comes to overall value, no other standalone headset is in the same ballpark right now.

There’s a few things we wish were better though. As we found in our full Quest 2 review, the included soft headstrap just isn’t that comfortable, which is why we recommend the Elite Strap ($50 on Amazon) or Elite Battery Strap (bundled with a case for $130 on Amazon) accessories if you’re a serious VR user.

The hidden built-in speakers are convenient but we wish they were more powerful for better immersion (luckily there’s a 3.5mm headphone jack if you want to use your own headphones). And while Quest 2 has a pretty strong game library, since it’s a standalone headset you won’t be able to play any of the big PC VR games like Half-Life: Alyx or Asgard’s Wrath unless you have a powerful PC to plug into.

It’s worth noting that some users have reported strap failure on official Meta products, so it may also be worth looking into the cheaper third-party solutions too. You’ll be foregoing Meta’s trusty warranty by going with a rando-strap, however a cursory look at options on Amazon show a number of headstrap/battery solutions you may try to save a few bucks.

Meta Quest 2 is compatible with all content in the Meta Quest library. If you have a gaming PC (or get one in the future), you can plug it into your PC to play content in the Oculus PC library and the SteamVR library.

Yup, our value pick for standalone headset is the same as our ‘Best’ pick: Quest 2! But if you’re brand new to VR and are just looking for a taste, you can probably hold off on the Elite Strap accessory and save yourself $50 in the meantime. If you find yourself using the headset often you can always add the strap later.

See the section above for thoughts and details on Quest 2.

The Best Console VR Headsets in 2021

PSVR launched in late 2016 and was a great headset for its era, including a handful of excellent exclusive VR games that you won’t find anywhere else. However, the headset is officially past its prime in 2021 and feels ‘last generation’ in resolution, tracking, and controllers compared to what’s available elsewhere in the VR landscape.

That’s probably because Sony has since announced that it’s working on a PSVR 2. While PS5 is backwards compatible with PSVR, it seems the company is counting on the upcoming version of the headset to take console VR into the next generation. We still have no idea when that’s coming though, so you may want to wait a bit longer to see Sony’s next step.

PlayStation VR is only compatible with VR content in the PlayStation store which includes a handful of excellent exclusives not available on PC like Astro Bot Rescue Mission and Blood & Truth. You can also use the headset to play non-VR PS4 content in a ‘theater mode’ through the headset, but with relatively low resolution it’s not something you’re likely to do often. The vast majority of PSVR titles are also backwards compatible with PS5.